Beautiful things come in small boxes, says the commercial, and gems come in small theatres. That’s the best way to describe A Midsummer Night’s Dream now playing at The Citadel Theatre in a production by the CH Collective.

Director Richard Sheridan Willis pulls it off with just eight actors in  a play that has some 22 characters plus fairies, lords and attendants to make a large theatre almost a necessity for staging it. Not so. In the small Citadel (I think it seats fewer than 100 people) with its a small, unadorned stage everything comes together for a delightful couple of hours of vintage Shakespeare.

Willis emphasizes the poetry and humour of the play and relies on his eight actors for ardour, agility and perfect timing to bring out the best. Of necessity all of the actors except one, take on two roles. 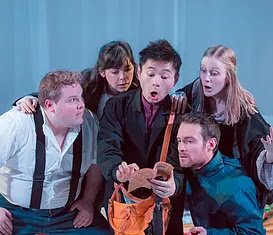 The lovers are attractive, agile, ardent and adept at speaking Shakespeare’s poetry. They are full of energy and they pick energy from each other. In other words they act and interact wonderfully and you wait for them to come back on stage. The joust between Hermia and Helena is splendidly choreographed and a complete joy to watch.

The artisans led by an irrepressible and exuberant Zach Counsil as Bottom are hilarious. He is the only one that does not take two roles aside from his part of Wall in the Pyramus and Thisbe interlude. (Counsil also takes care of magic design and fight choreography). The parts of the other artisans are taken by the lovers with great results. Greenblatt plays Snug who plays the lion in the interlude. Fox becomes Starveling who becomes Wall. Nerenberg plays Flute who plays Thisbe.

Elizabeth Saunders looks like an unlikely Puck but she dispels any doubts about her ability to be the fairy attending Oberon. Fleet-footed with natural comic sense, Saunders is excellent. She also plays the serious-minded patriarch Egeus. 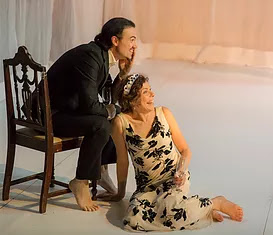 Paul Amos and Rena Polley
Paul Amos doubles as Theseus and Oberon while Rena Pulley plays Hippolyta and Titania. Theseus wooed Hippolyta with the sword and she is not a happy women in Willis’s view. A nice touch occurs when on exiting the first scene where Hermia is being forced to marry Demetrius, Hippolyta comforts her. She knows what it is like to be forced into an unwanted marriage. It is just one example of an imaginative and superb production by Willis. He bookends the play with Hermia reciting Theseus’s words about “The lunatic, the lover and the poet” being creatures of the imagination at the beginning. At the end the play we find Hermia sleeping on the stage. The whole play is indeed a midsummer night’s dream

The stage area has sheer curtains on all sides and the only items on the set are a chair and a large patchwork quilt to indicate the woods. Set and Costume Designer Shannon Lea Doyle gives us all we need.

A gem of a production.
________________
A Midsummer Night’s Dream  by William Shakespeare in a production by The Chekhov Collective continues until March 11, 2018 at The Citadel Theatre, 304 Parliament St. Toronto, Ontario. www.thechekhovcollective.com