The Drawer Boy is a marvelous play about friendship, love, loss, memory and humorous incidents on a farm. Nina Lee Aquino directs a fine-tuned production at Theatre Passe Muraille that captures the humour, the pathos and all the affecting emotions of the story of two friends as it unfolds.

The story is outwardly very simple. An actor visits a farm to see how farmers live so he can write a play. Miles (Graham Conway) is a city boy and the farm that he visits is run by two friends, the no-nonsense Morgan (Andrew Moodie) and the mild mannered Angus (Craig Lauzon). Angus has problems. He has no memory and forgets everything that happens. He is subject to serious headaches and he is able to function because Morgan looks after him only as a devoted friend would. 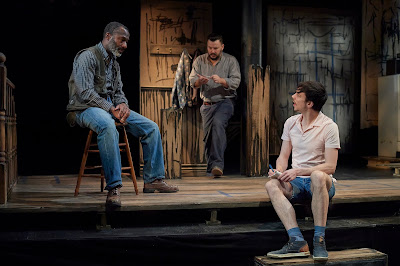 Angus has a facility for numbers and a talent for drawing. He was the brighter of the two friends and was headed for university but the war came and they joined the army. They were sent to England where they met two women. They fell in love with them and Angus drew the plans for two adjoining houses.

The humour of the play comes from the city boy trying to deal with farm animals and farm machinery. Heaving bales of hay in short pants can be very painful but that is what Miles does. He tries to drive a tractor and milk some cows.

Conway as Miles is eager, innocent, confused, bright and ambitious. He wants to write a play and he keeps scribbling whatever he hears. A finely nuanced performance. 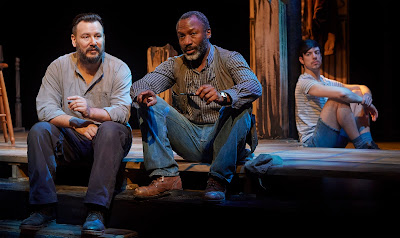 Craig Lauzon (left), Andrew Moodie and Graham Conway. Photo: Michael Cooper
Lauzon as Angus projects a man who is mentally challenged but who seems to have many more issues. We sense there is more to Angus than headaches, making sandwiches and facility with numbers. Again, we get a well-tuned and sensitive portrayal.

Moodie as Morgan appears to be a tough and efficient farmer but we discover quickly that he is Angus’s faithful protector. As the story unfolds we get a fuller picture of the strength and decency of Morgan whose relationship with Angus rises to the ultimate definition of friendship. All superbly done by Moodie.

The direction by Nina Lee Aquino is expert, the pace top flight and the end result outstanding.

Joanna Yu’s set of Angus and Morgan’s farmhouse with emphasis on the kitchen and the drawings on the wall is highly adept. The drawings, as you may have inferred, play an important part in the play.

Just go see it for a splendid night at the theatre.
_____