I have a prejudice against the adaptation of novels into stage plays. There is a world of difference between the two and I feel that adapting a successful work of fiction for the stage shows a failure of imagination or ability on the part of a writer. If you want a play, write a play. There are successful transfers from novel to stage but my prejudice remains.

The current adaptation of George Orwell’s 1945 novella Animal Farm for the stage by Anthony MacMahon for Soulpepper did nothing to mitigate my prejudice. Director Ravi Jain and Set and Costume Designer Ken MacKenzie dressed up the cast in various costumes to represent the animals of the story and made brave attempts at humour and drama but many of the efforts fell flat. 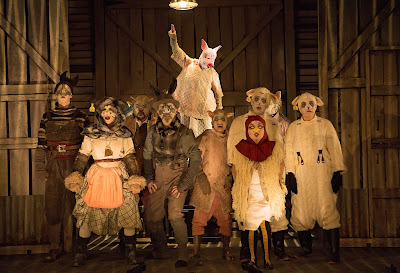 
Animal Farm is a fable that indicts and satirizes the Russian Revolution and the communist takeover of Russia by the Bolsheviks. Communism is one of the greatest crimes and frauds perpetrated against humanity but there are still people who support it despite overwhelming evidence of the evil it has meted on humankind.

Eleven actors take on twenty four roles under the direction of Jain in Soulpepper’s presentation of the takeover of Mr. Jones’s farm by the animals in clear parallel with facts of Russian history from Lenin to the brutalities of Stalin.

The actors wear ears, snouts, masks and other paraphernalia to indicate the numerous farm animals of Anima Farm. There is a great deal of effort dedicated to changing the voices of the animals. The horses have low voices, the chickens cackle and most of the voices seem to have an echo or reverberation. After a while I found the sound less than attractive and would have preferred to have the actors do their job rather than have artificial changes to their voices that proved unhelpful.

As a result the satire on the abuse of the animals by the pig called Napoleon (Rick Roberts), who becomes the party leader, the lies and the propaganda are reduced to caricature that is neither funny nor effective. Laughter is scarce and muted when we should be able to get at least a few hearty guffaws. The suffering of the animals, especially of the faithful horse Boxer (Oliver Dennis) should be very moving but the production reduces that part to the point where it is neither human nor animal. 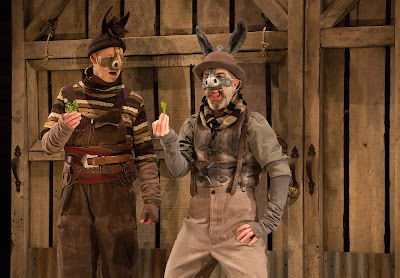 Oliver Dennis and Guillermo Verdecchia, photo by Cylla von Tiedemann
Squealer (Miriam Fernandes) is the ultimate propaganda machine who lies with complete conviction and for whom facts mean nothing. Benjamin (Guillermo Verdecchia) retains his judgment and sees the corruption of the leaders and the fate of the other animals with clarity.

In the 2 hours and 15 minutes running time of the performance, including a 15 minute intermission, you could read the book and get much more out of it than you do from this production. But all of that may just be my prejudice.
____________
Animal Farm by George Orwell, adapted by Anthony MacMahon continues at the Young Centre for the Performing Arts, 55 Tank House Lane, Toronto, Ontario. www.soulpepper.ca.