The National Theatre’s production of Julius Caesar that was broadcast live to cinemas presents an original reading of the play in a new theatre in London. Nicholas Hytner ran the National Theatre for 12 years and upon leaving it he founded, with Nick Star, the Bridge Theatre near Tower Bridge in London.

Julius Caesar is produced in a theatre-in-the-round with a stage in the middle and people standing around the stage. The production begins with a rock concert that lasts for about a quarter of an hour. The musician are wearing T-shirts that read JUST DO IT! JULIUS CAESAR and a very youthful crowd enjoys the loud music. The tribunes appear among the crowd and start castigating them for taking time off for no apparent reason. The concert crowd becomes the Roman mob attending the return of Caesar. 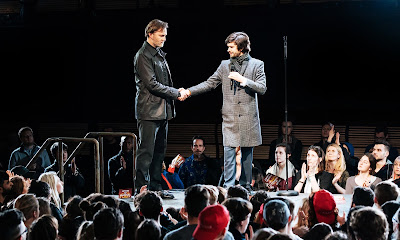 David Morrissey as Mark Anthony and Ben Whishaw as Brutus. Photograph: Manuel Harlan
Caesar (David Calder) enters, a gray, overweight man in a suit wearing a red baseball cap with the Just Do It!! motto on it and looking very much like Donald Trump. The costumes are all modern casual wear. When Caesar faints from the falling sickness we see him being taken away in a wheel chair with an oxygen mask on. Nice touch to indicate that this man who perhaps wants to become king but pretends the opposite is past his best before date.

The play is set in a modern war zone with automatic weapons and pistols and a generous use of bullets. The actors are in the middle of the audience so that at about half of the spectators watch the back of the players. The audience in the movie house have no such restriction because there are camera on all sides and we have a full view of the action all the time.

All the action takes place during darkness and we see the small square platform and some members of the audience in the beginning. Once the war starts and there is broken furniture and wires all over to indicate a war zone. At least we get glimpses of it but rarely do we see the whole stage. When there are flashes of light and we get a long shot and we get some appreciation of the havoc that is in front of us but when the actors speak the camera usually focuses on them. When the camera focuses on the speakers we usually see only a dark background.

This produces an uneasy feeling. You know there is a great deal going on and at times all you see is faces of characters but no context. It’s like experiencing war scenes without really getting a good look at them.

Ben Whishaw plays the honourable Brutus. Whishaw’s performance is distinguished by his ability to show intelligence, integrity and a fundamental weakness. Cassius has an instinctive understanding of his friend’s character and is able to manipulate him and convince him to join the conspiracy to assassinate Caesar. A highly nuanced and effective performance by Whishaw. 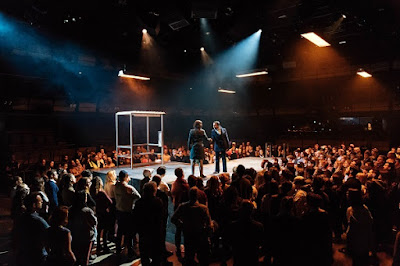 Photo: Manuel Harlan
Hytner has cast woman in some of the major roles. They are referred to by the feminine pronoun but aside from that they are men. Michelle Fairley is a clever, scheming and cunning Cassius able to control and pervert people to his wishes. She gives us a superb performance.

Kit Young’s Octavius is petulant, arrogant and dismissive of others and an emperor in the making. David Morrissey’s Mark Antony is a capable politician who is ambitious but lacks the unscrupulousness and instinct for going for the jugular.

Hytner is an old hand at directing Shakespeare and he has gathered a cast that delivers Shakespeare’s lines clearly, meticulously with attention to every syllable. It is no small achievement.

The production is meticulous and nuanced but it suffers by the way it is presented in the movie house. I felt that I missed as great deal of the bigger picture although I enjoyed the close-ups and the avoidance of having to watch actors’ backs.
__________