AN AMERICAN IN PARIS – REVIEW OF STAGE VERSION OF GERSHWIN MUSICAL

An American in Paris has such unbeatable, indeed aristocratic, provenance that it attracts attention, imitation and adaptation. With music by George Gershwin and lyrics by Ira Gershwin its position in the American musical pantheon is assured of a prime position. The 1951 musical with Genre Kelly and Leslie Caron directed by Vincent Minnelli is one of the best films in the genre.

The film has been adapted for the stage by Craig Lucas who was “Inspired by the Motion Picture,” according to the program and the musical has reached Toronto in the hands of a touring company.

It goes without saying that the Gershwins are the stars. “An American in Paris” is a brilliant concert piece that is used for the long ballet sequence. “I got rhythm,”  “’S Wonderful” and “shall we dance” are familiar and beautiful songs that are a pleasure to hear. In short, you will get some superb ballet sequences, some decent singing, some moronic comedy and Broadway glitz that add up to a highly entertaining night at the theatre. 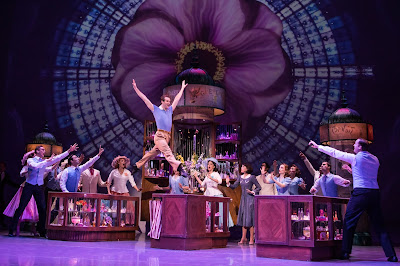 An American in Paris Touring Company. Photo by Matthew Murphy.
Jerry Mulligan (McGee Maddox) is an American soldier in Paris at the end of World War II. He tears up his return ticket to the U.S. and decides to stay in Paris to pursue his passion for painting. He sees a beautiful and mysterious woman and falls in love with her. Sure. Enough suspense. Her name is Lise (Allison Walsh) and she is a budding ballerina.

He meets Adam Hochberg (Matthew Scott), an American musician who was wounded in the war and he will be useful for some comic relief. He describes himself as Oscar Levant who, for those old enough to remember him, was in fact a concert pianist, composer and colourful personality and played Adam in the movie.

We need a third man to get some symmetry in the love triangles and Henri (Ben Michael) fits the role. He is the son of the wealthy Monsieur Baurel (Scott Willis) and Madame Baurel (Teri Hansen) and he has a secret ambition to become a nightclub entertainer.

The woman who will fascinate the men is Lise and she is beautiful, poor, exceptionally talented and has a high moral obligation to marry Henri. Stay tuned because there is a touching story to be told.

The main cast is rounded off by Milo Davenport (Kirsten Scott), rich, blonde American who gets involved in the lives of the aforementioned.

McGee Maddox is a superb dancer and you wait for the ballet sequences. His athletic coordination and bravura dancing from beginning to end are worth the price of admission alone.  Simply marvellous. He is not too bad as a lover and somewhere in the same category as a singer. You can’t have everything but he does have a lot. 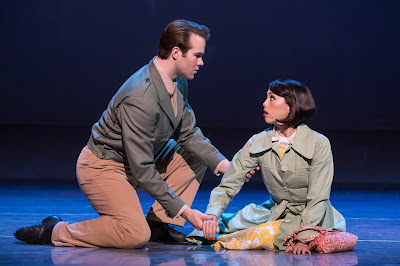 McGee Maddox and Allison Walsh. Photo by Matthew Murphy.
Allison Walsh meets him step by step in their ballet sequences and she is good vocally as well. Kirsten Scott’s Milo is a classic in the genre of the rich and beautiful who almost get the prize hero. She manages some fine cadenzas and gets high marks for her overall performance.

Craig Lucas’s book goes quite well until the beginning of the second act when the writing drops to silly sitcom comedy that provides few laughs. But the story eventually finds its rhythm and the dancing propels it to heights of absolute delight.

The set by Bob Crowley shows realistic and abstract views of Paris and a kaleidoscope of brilliant colours. The costumes are impressive and you are left with an overall dazzling show.
Director Christopher Wheeldon keeps up a balanced pace that ranges from the frenetic to the dramatic, to the romantic and in the end all is well and a bit of escapism comes to a rousing conclusion.
__________
An American in Paris by George Gershwin (music), Ira Gershwin (lyrics) and Craig Lucas (book) opened on March 29, and will play until April 29, 2018 at the Princess of Wales Theatre, 300 King St. West, , . www.mirvish.com/  416 872 1212