THE SCHOOL FOR SCANDAL – REVIEW OF 2017 STRATFORD FESTIVAL PRODUCTION

Richard Brinsley Sheridan took no hostages in his brilliant satire of upper crust society in late 18th century England. His 1777 masterpiece, The School for Scandal skewered scandal mongering, hypocrisy and shallowness but allowed decency and fidelity to triumph.

Antoni Cimolino, the Stratford Festival’s Artistic Director assigned directorial duties for the production to himself and the result is highly commendable with some reservations. 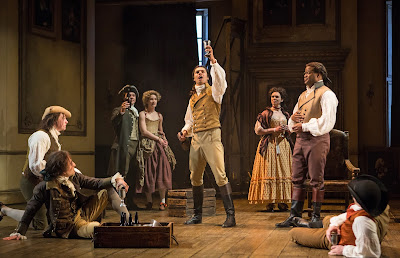 Members of the company in The School for Scandal. Photography by Cylla von Tiedemann.
The play has twenty-one roles plus “servants and maids” which add up to a hefty cast. The festival’s boss seems to have had no trouble recruiting the best actors in town. Look at the names that Sheridan gives to some of his characters to get the flavour of the play: Lady Sneerwell, Snake, Mrs. Candour, Crabtree, Sir Benjamin Backbite and Careless.

Maev Beaty as Lady Sneerwell with her cohort Snake (Anusree Roy) and Mrs. Candour  (Brigit Wilson) are a veritable wrecking crew of lives, reputations, marriages and engagements using that most delicate of instruments the spread of false news or innuendo.

The old bachelor Sir Peter Teazle (Geraint Wyn Davies) married the lovely young country girl Lady Teazle (Shannon Taylor) who turns out to be a wastrel. The seemingly virtuous Sir Charles Surface (Sébastien Heins) mounts an assault on her fidelity and …well, will he succeed? The rumour mills are working in full gear.

Charles is also after the wealthy Maria (Monica Peter) who is pursued by his apparently profligate squanderer of a brother named Joseph (Tyrone Savage). They are living from the generosity of their uncle Sir Oliver (Joseph Ziegler) who is arriving incognito to check on his nephews.

And that’s just the beginning. We have the foppish Sir Benjamin of Tom Rooney, Brent Carver as Rowly and the marvelous Rod Beattie as Crabtree.

The play is thickly plotted and its 18th century wit and colourful language require a light touch and in a perfect world an upper crust English accent. The verbal comedy may suffer a bit from this lack but the farcical comedy comes out splendidly. Lady Teazle is in Charles’ apartment and she hides behind a screen when her husband arrives. She is finally and hilariously discovered by her husband and a desperate Sir Oliver. 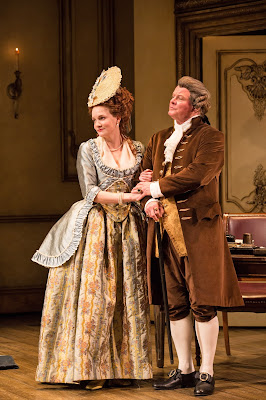 Shannon Taylor as Lady Teazle and Geraint Wyn Davies as Sir Peter Teazle. Photography by Cylla von Tiedemann.
Sir Oliver tests his nephews’ characters by asking one for financial assistance and being roundly rebuffed. He attends the sale of his paintings by the other nephew who is willing to sell everything except Sir Oliver’s portrait.

The plot strands of May-December marriage of Sir Peter and the revelation of the incognito visitor as Sir Oliver will merge amid the backbiting of the ladies in the rumor mill and all will be resolved.

With actors like Maev Beaty, Geraint Wyn Davies, Rod Beattie, Tyrone Savage, Sébastien Heins, Shannon Taylor, Brent Carver, Joseph Ziegler and Tom Rooney (listed in no particular order), there should have been a much more enthusiastic reception. The audience on the day I saw it (June 6) was fairly unresponsive during the first half but the laughter picked up greatly in the second half.

Designer Julie Fox gave us a lavish set and marvelous costumes. Nick Bottomley designed the projection of images and indications of place that gave the performance additional movement.

A fine production that has all the ingredients for a resounding success but lacked the necessary spark to ignite the audience.
_____________


The School for Scandal by Richard Brinsley Sheridan opened on June 3 and will run until October 21, 2017 at the Avon Theatre, 99 Downie St. Stratford, ON N5A 1X2. www.stratfordfestival.ca
Posted by James Karas at 1:30 AM