ME AND MY GIRL – REVIEW OF 2017 SHAW FESTIVAL PRODUCTION

After the religious and political rigours (not to mention treachery, torture and burning at the stake) of Saint Joan, you may want some lighter theatrical fare. The Shaw Festival obliges with a production of Me and My Girl, the 1937 rags-to-riches musical.

In Canada winning the lottery may be considered as rags-to-riches but in England a stash of cash will not do it. You need to leap in a single bound to the top reaches of the social ladder in order to be considered.

Which brings us to the story of Bill Snibson ((Michael Therriault), the star of Me and My Girl. He is a Cockney whose barbaric accent alone, places him in the social dungeon but who finds out that his late father was an earl and he has inherited his cash and the coronet. 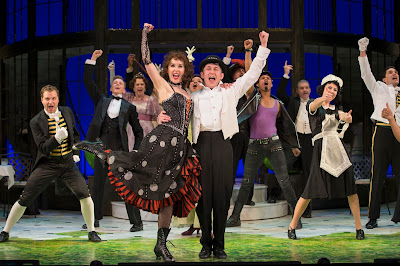 Kristi Frank as Sally Smith and Michael Therriault as Bill Snibson with the cast of
Me and My Girl. Photo by David Cooper.
Bill knows nothing about his paternity until he is presented to his father’s family and friends at Hareford Hall, the family pad which defines wealth, elegance and superb set design by Drew Facey.

A rough-hewn Cockney among the pristine aristocrats provides easy and sometimes obvious humour. When Bill is given all his titles by Parchester (Jay Turvey), the loquacious family solicitor, he faints. When he is told to be careful with a two hundred year old decanter, Bill replies “Thank God…it could have been a new one.”

Before he can take his inheritance, his father’s sister, the Duchess (Sharry Flett) and Sir John (Ric Reid) as executors of the estate must decide if Bill is a fit and proper person to become earl. That means the transformation of Eliza the guttersnipe to Miss Eliza Doolittle of My Fair Lady fame. There is in fact a reference to the play Pygmalion and to the musical.

But there is more: Bill must marry a woman who is also fit and proper to be a Duchess. Matters become complicated because the beautiful, ambitious and covetous Lady Jacqueline (Élodie Gillett) her sights set on Bill. But Bill is in love with Sally Smith (Kristi Frank), a sensible Cockney girl who intends to renovate Hareford Hall by throwing out all the rubbish and bring some new furniture and flowered wallpaper.

Let there be no mistake about Bill and Sally’s relationship. They sing to us that they are meant for each other and intend to be happy ever after. This is crucial. As one can see, the stakes are high, the suspense intense and the situation tough to unravel.
The above gives a good indication of the flavour of the musical. The plot is fairly vacuous but it is perhaps vintage pre-Rodgers and Hammerstein material. Stephen Fry revised the original book by L. Arthur Rose and Douglas Furber by adding some good lines. “She is like Mussolini without charm” is a good example. 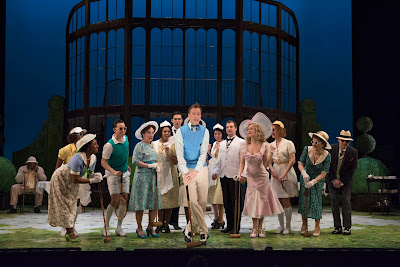 The cast of Me and My Girl. Photo by David Cooper.
The signature song of Me and My Girl is “The Lambeth Walk,” a brisk melody that is perfect example of reverse snobbery. Lambeth is no Mayfair but people are happy there, everything is free and easy and everything is bright and breezy. This is part of the depression mythology that few of us can recall. The number is done with energy and fun.

The whole show is brought together by director Ashley Corcoran with commendable results.

Costume Designer Sue LePage knows how to dress the aristocratic ladies and gentlemen. Elegance, style, haute couture, a delight to the eye.


Me and My Girl by L. Arthur Rose and Douglas Furber (book and lyrics), revised by Stephen Fry, with contributions by Mike Ockrent, Noel Gay (music) continues in repertory  until October 15, 2017 at the Festival Theatre, 10 Queen’s Parade, Niagara-on-the-Lake, Ontario. www.shawfest.com
Posted by James Karas at 11:46 PM