You may recall Lady Bracknell’s admonition to Mr. Worthing in The Importance of Being Earnest upon being told he has lost both his parents: ‘To lose one parent, Mr. Worthing, may be regarded as a misfortune; to lose both looks like carelessness.’

The Royal Opera House can hardly be accused of carelessness but it did lose the soprano and the tenor in one day of the performance of L’Elisir d’Amore.

Lady Bracknell further demanded that he ‘make a definite effort to produce at any rate one parent, of either sex, before the season is quite over.’ The ROH did not have such luxury and in fact had to find a soprano on the day of the performance and a tenor between scenes. 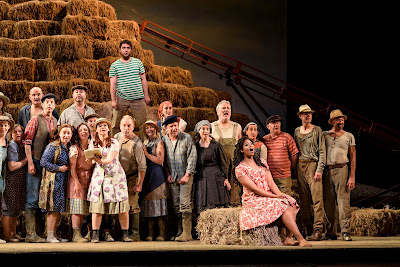 During the day an email message advised that soprano Aleksandra Kurzak had withdrawn from singing the role of Adina due to illness and the role was to be taken by Jennifer Davis. At the end of the first scene after the performance began, we were informed that tenor Roberto Alagna could not finish it and that he would be replaced by tenor Ioan Hotea.

This production of Donizetti’s masterpiece of love, innocence and quackery was first directed by Laurent Pelly in 2006 and it has been revived numerous times since then. The current revival director is Daniel Dooner. Pelly set the opera in an agrarian Italian village in the 1950s. There are bales of hay, a tractor, a harvester and the ambience of a peaceful village. The men drive Vespas and the main concern is love and the promises of the quack Doctor Dulcamara.

We were not short changed at all by the replacement of Alagna by the Romanian tenor Hotea. Hotea may lack Alagna’s darker shades but he gave us a youthful and energetic Nemorino that was a  delight.  He has a marvelous, light voice in the style of Juan Diego Flores that showed beauty and agility. This Nemorino is pure innocence, love and vulnerability and deserves to get the girl.

Irish soprano Jennifer Davis as Adina wowed us with her tonal beauty and tenderness. Her Adina showed innocence and cunning and we enjoyed every note of Donizetti’s incomparable melodies.

Italian bass baritone Alex Esposito sang the role of the mountebank Doctor Dulcamara, a quack, a fast buck artist who is crooked but likable, sleazy but not evil. Esposito does it all with a glint in his eye and a sonorous voice in his larynx.
Nemorino’s competition for Adina is Sergeant Belcore, an arrogant martinet sung by Czech bass-baritone Adam Plachetka. No complaints about Plachetka’s vocal and acting performance but we are glad he does not get the girl.

Donizetti provides a wealth of choral music and the Royal Opera Chorus is shown at its best. The Orchestra of the Royal Opera House under Bertrand de Billy is superb.
L’Elisir d’Amore is a delightful opera, a comedy that produces laughter even through surtitles. Pelly’s conception and its execution by an outstanding cast, orchestra and chorus makes for a wonderful evening at the opera.

You disagree with Lady Bracknell at your peril but on this occasion you may risk it. To lose…a soprano and a tenor…was neither tragic nor careless and it did not detract from the performance.
_____________
L’Elisir d’Amore by Gaetano Donizetti (music) and Felice Romani (libretto) played from  May 27 to June 22, 2017 on various dates with cast changes at the Royal Opera House, Covent Garden, London, England. www.roh.org.uk