A play about Canada is not as rare as it used to be but it is hardly an everyday occurrence. It is not surprising that we know more about American and British history than we know about Canada and that is pretty sad.

1837: The Farmers’ Revolt is precisely the type of play we need more of. It is highly entertaining and intelligent, it highlights an important historical event and, if I can say it without frightening some people off, it is educational. Rick Salutin wrote the play that started life in 1973 as 1837 as a collaborative effort with Theatre Passe Muraille, so much so in fact that the theatre is listed as co-author. 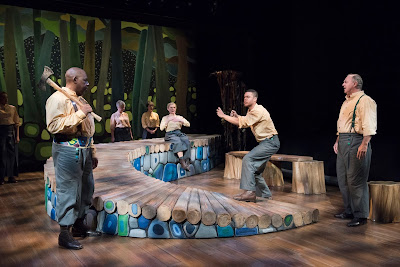 The cast of 1837: The Farmers’ Revolt. Photo by Emily Cooper
One hundred and eighty years after the rebellion and on the 150th anniversary of Canada, the play is the perfect choice to salute both events.

The play tells the story of the 1837 rebellion through a number of events during and around the time of the uprising. Eight actors represent a large number of characters including farmers, artisans, politicians, officers, soldiers and others involved in the events of December 1837. There are a number of historical figures but the most important and best known is William Lyon Mackenzie, the leader of the revolt.

Salutin wants us to see the two extremes of the social and political spectrum. The well-heeled ruling class of conservatives who are a compact unit of corrupt and rapacious families. At the other extreme are the poor farmers who try to get some land to eke out a living.

The poor squatter who has cleared dozens of acres but is turned out by the unscrupulous owner. The imperious lady who is on her way from Toronto to Niagara-on-the-Lake by coach that gets stuck in the mud and treats the driver like dirt. The Tory politicians who beats up people who want to vote for reform. This is life in Upper Canada as represented in Salutin’s play. 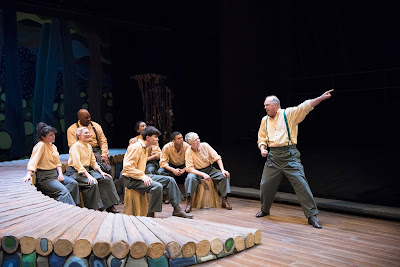 The cast of 1837: The Farmers’ Revolt. Photo by David Cooper.
We have highly flattering scenes of American freedom, ingenuity and industry that is compared to the detriment of life in Canada. Americans can disagree but they are free to vote as they wish. In Canada, voting Reform invites fists and missing teeth for those who dare not to vote Tory. The Americans tell you how to get land without blushing: get rid of the Indians. It will take some time to give that attitude its proper name, but I digress.

There is a firebrand journalist who wants to lead a rebellion and change all of that. Mackenzie played by Ric Reid is ambitious and visionary but not necessarily astute in military procedures and strategy. The play that begins with songs ends up with ropes around some people’s necks and the sad end of the rebellion.

There are songs (sung a cappella), mime in cutting trees, fighting and warring in relating the episodes of the play. All eight actors play numerous roles with the three women taking on some male roles. I list them alphabetically: Donna Belleville, Sharry Flett, Jonah McIntosh, Marla McLean, Ric Reid, Cherissa Richards, Travis Seetoo and Jeremiah Sparks. I applaud them together vigorously.

The casting is color-blind as it should be but I could not help thinking that the characters played by the black and oriental actors would have had no rights at all if in fact they were of a different colour. It was bad enough for the poor whites; it was indescribably worse for non-whites.

The set designed by Rachel Forbes consists of a brightly coloured backdrop representing trees and logs. The stage has logs in a circular arrangement leading upwards. Perhaps it is an expression of hope and optimism in a corrupt world in which there should have been very little of either.

Director Philip Akin does a highly commendable job in bringing this Canadian classic to life. It is unfortunate and perhaps ironic that the theatre had many empty seats, at least on the date that I saw the play. Canadian plays of high quality in excellent productions deserve better.
______


1837; The Farmers’ Revolt by Rick Salutin and Theatre Passe Muraille continues in repertory until October 8, 2017 at the Court Hose Theatre, Niagara-on-the-Lake, Ontario. www.shawfest.com.
Posted by James Karas at 9:35 PM