How about a play based on a movie, to wit, Federico Fellini’s La Strada?

Director Sally Cookson has done just that and a play based on the 1954 film is now playing at The Other Palace, a small theatre around the corner from the more famous Victoria Palace which is being refurbished.

La Strada is based on a moving story that is part myth and part ugly reality. The myth is about Gelsomina, a waif, who is sold by her mother to a brute. She goes through endurance, transformation, death and transfiguration. The reality is about post World War II Italy, devastated by the Fascists, the Nazis and the allies, with its people left with poverty and starvation. 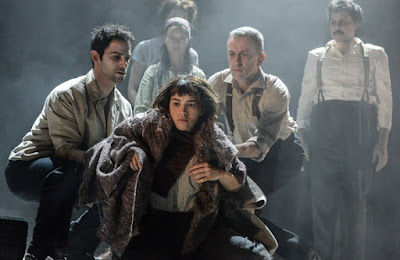 Audrey Brisson and the cast of La Strada. Photo: Robert Day
A mother with five children sells her oldest child to Zampano, the strongest man in the world who can break a steel chain by expanding his chest. He is a brute who flogs and criminally mistreats the young girl who is prepared to do anything to please him because she wants to send money to her mother.

Cookson, her “writer in the room” Mike Akers and Set and Costume Designer Katie Sykes are exceptionally successful in creating the world of circuses, magic and popular entertainment that Gelsomina and Zampano travel through. They travel on a motorcycle and a few rearranged boxes on the stage create the illusion of a motorcycle in a matter of seconds. The circus, a chapel, a wedding and the empty countryside are created just as quickly. The real and the magical travel together.

Gelsomina meets a clown who gives her confidence and a trumpet to play. She learns, she is transformed and stands up to her owner.

Audrey Brisson gives a moving and splendid performance as an abused child who tries and endures everything because she has no choice and wants to help her family. We follow her every step with our hearts going out to her and ready to pounce on the creepy Zampano. 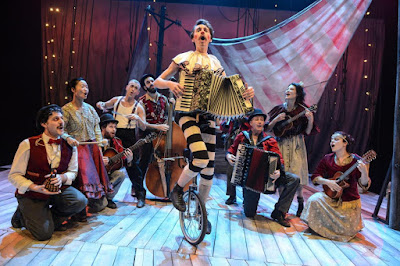 Bart Soroczynski and the cast of La Strada Photo:Robert Day
Stuart Goodwin is outstanding as Zampano – we would not hate him if he were anything less. He imposes his physical strength and is ready to annihilate anyone who stands in his way.

Canadian Bart Soroczynski plays the clown who is the opposite of Zampano. He is funny, agile and a fine circus performer on the monocycle. He befriends Gelsomina and helps bring about her transformation.

There is an ensemble of actors who play various roles as Gelsomina and Zampano move from place to place, from the countryside, to bars, to places where they perform, to the seashore, to a chapel in a monastery.

Benji Bower has composed original music for the play consisting of Italianate folk melodies that are pleasant and fitting. A band of musicians is on stage to play but they are also part of the highly mobile ensemble.

Do you want to see a play based on a movie?


La Strada created by Sally Cookson with music by Benji Bower, written by Mike Akers, based on the screenplay by Federico Fellini, Ennio Flaiano and Tullio Pinelli continues until July 8, 2017 at The Other Palace, 12 Palace Street, London, England. www.TheOtherPalace.co.uk
Posted by James Karas at 7:40 PM