The Shaw Festival has a new season, a new Artistic Director and a new production of Saint Joan. The first is the result of the orbits of the planets and a habit that sprang in Niagara-on-the-Lake in 1962.  The second is as a result of the appointment amid some controversy of Tim Carroll as Artistic Director. The new production of Saint Joan is the choice of Carroll to direct the play.

I will refrain from commenting on the movements of the planets or on the appointment but will say a few things about his first directorial foray at the Festival. Carroll’s approach to the play and the superb performances are outstanding. 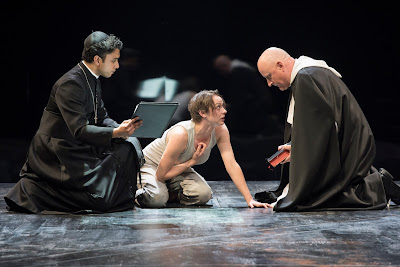 Andrew Lawrie as Brother Martin Ladvenu, Sara Topham as Joan and Jim Mezon as the Inquisitor
in Saint Joan. Photo by David Cooper.
Let’s start with something that may appear inconsequential: laughter. I don’t expect to get too many laughs from Saint Joan but Carroll has found a significant number. Take the opening scene where Robert de Baudricourt (Allan Louis) is bullying his Steward (Andrew Lawrie) about the lack of eggs. His blustering is toothless and when Joan appears she has no difficulty cutting him down to size and getting her way.

Joan as played by Sara Topham is a vivacious, pleasant girl with a smile on her face who expresses her convictions without being sanctimonious or overbearing. She conquers de Baudricourt and we are treated to several good laughs in the process. A very good beginning. 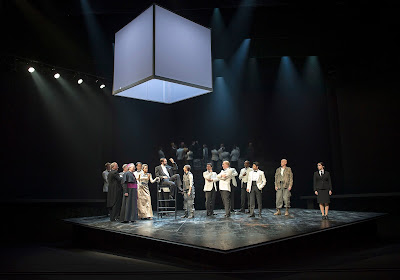 The cast of Saint Joan. Photo by David Cooper.
Let’s jump to the end. Posthumously, Joan meets her tormentors and Carroll again manages to evoke some laughter. The Soldier’s (Allan Louis) description of hell and the fate of all the self-important people, the kings, captains and lawyers, who are all “down there.” We laugh at the reaction by the latter personages at the thought that Joan may return to earth. A brilliantly done scene.

Joan is caught up in a war between France and England and between the overpowering force of the Church Militant and political necessity. The most important forces are those of hypocrisy, arrogance, self-righteousness and expedience. She maintains her equilibrium almost throughout and when she breaks down she is dramatic without being sanctimonious except perhaps in her last sentence.

The wily and cynical Earl of Warwick (played with suave brutality by Tom McCamus) expresses political expediency and polite ruthlessness. Benedict Campbell is the arrogant and authoritarian Archbishop of Rheims. Jim Mezon expresses the ultimate and merciless authority of the Church in a lengthy speech at the trial. He faces the audience and speaks directly to us in a vision of the Church that should frighten even the most devout.

The production is acted on a raised platform on the stage. All wear modern costumes and the emphasis is on black. there is one scene that is mercilessly ironic where the men wear white jackets and black bow ties as if attending a high class reception.There is a plexiglass glass that is lit inside and lights stream on the stage from above. Highly effective work by Designer Judith Bowden and Lighting Designer Kevin Lamotte.

In the end, we get a brilliant production that gives us the drama, the intellectual content and the humour of the play.
__________


Saint Joan by Bernard Shaw opened on May 25 and will run in repertory until October 15, 2017 at the Festival Theatre, 10 Queen’s Parade, Niagara-on-the-Lake, Ontario. www.shawfest.com
Posted by James Karas at 9:56 PM