Robert Icke directed an idiosyncratic staging of Hamlet for the Almeida Theatre which has now transferred to the Harold Pinter Theatre in London’s West End. The production shows originality, imagination and outstanding directing by Icke and a superb cast. It is a Hamlet for the record books.

The modern dress production makes liberal use of video projections and sets the play in modern day Denmark. It opens with videos projected on a number of screens around the theatre showing a state funeral as it would be covered by the media. There is a motorcade, pictures of mourners and all the hoopla surrounding an important burial. The play proper begins in a security room where the guards are watching a number of close circuit camera screens where the Ghost of Hamlet appears. 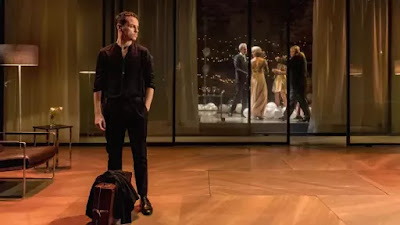 Andrew Scott with Juliet Stevenson and Angus Wright in Robert Icke’s Hamlet. Photo: Manuel Harlan The Norman Conquests (2013)
Photos by Cylla von Tiedemann
Much of the action of the play takes place in a simple room with a couch and a chair with changes made for different places in the palace. When we first see Gertrude and Claudius they are dressed formally for a fine reception. The reception is behind a glass wall and the dialogue takes place on front of it.

We soon notice that Claudius (Angus Wright) and Gertrude (Juliet Stevenson) are very much in love. In the reception room they dance, embrace and kiss quite passionately and the relationship continues like that almost to the end when Gertrude finally realizes Claudius’s treachery.

Icke interprets almost every character in the play his own way. Hamlet is an outsider dressed in black slacks and T-shirt and is barefoot. He and the rest of the characters speak matter-of-factly in a very naturalistic way. Claudius addressing Gertrude, Hamlet, Polonius and his children and everyone else speak in the same relaxed manner. That will change of course when the emotional thermometer explodes but it will take a while to get there.

The down-to-earth Hamlet (Andrew Scott) and Ophelia (Jessica Brown Findlay) are playful lovers. He hides in her father’s house and steals kisses. In his soliloquies he shows genuine wonder about what is happening and he is addressing us as well as himself.

He rises to the emotional demands of the play but he is never histrionic. His soliloquies are indeed conversations with himself but not emotionally overcharged. In all of this I think Icke finds a fine balance and a highly commendable approach. This is an original and finely acted Hamlet that Andrew Scott delivers under the guidance of Icke.
Ophelia is a mature young woman who hears her father’s and brother’s admonitions without listening to them. She looks on Hamlet as if they were equal and her fall is the more painful and dramatic for that. 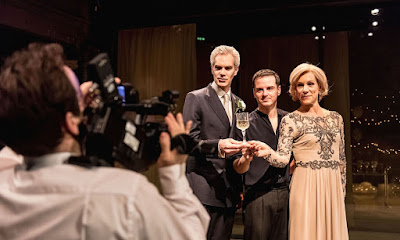 Angus Wright, Andrew Scott and Juliet Stevenson in Robert Icke’s Hamlet. Photograph: Manuel Harlan
(2013)
Photos by Cylla von Tiedemann
Angus Wright has one of those mellifluous, deep voices that is just a pleasure to listen to. His Claudius is a very cool usurper and seducer. He is supposed to be found praying by Hamlet and is not murdered by him for fear of sending his soul to heaven. In this production he is ruminating in a chair and Hamlet is in front of him with a gun but does not shoot. The scene is confusing because they are looking directly at each other and Hamlet is pointing a gun at him.

Peter Wright plays Polonius as an elder statesman and loving father without trying to get laughs by emphasizing some of his buffoonish traits. Juliet Stevenson is a highly attractive Gertrude who is sexually attracted to Claudius and resists him only momentarily after the closet scene with Hamlet. Her realization during the fencing is superb theatre.

In addition to all the directorial touches and brilliance that Icke displays he finds his own exit for the play which is yet another marvelous touch but I will not spoil it for you.