THE GOAT OR WHO IS SYLVIA? – REVIEW OF ALBEE’S PLAY AT THEATRE ROYAL HAYMARKET

The Goat or Who is Sylvia?, Edward Albee’s play, refers to the animal that plays a crucial part in the play but also looks back to the roots of tragedy. The word tragedy means goat song and no one really knows what the Greeks were referring to when they assigned that word to the creation of that great dramatic genre.

The Goat is a tragedy about a man who falls in love with, yes, a goat. There is nothing comic about the intense relationship between Martin (Damien Lewis), a successful architect and a good father and husband, and the goat that he names Sylvia. He is deeply and genuinely in love with her. 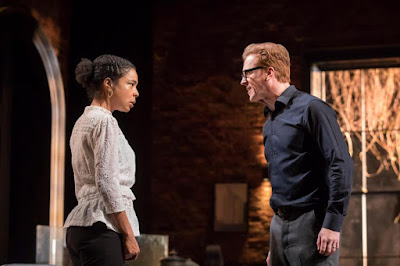 Sophie Okonedo and Damian Lewis star in The Goat, or Who Is Sylvia? Johan Persson
Martin’s wife Stevie (Sophie Okonedo) finds out about the relationship and, not surprisingly, freaks out. The couple has a son, Billy (Archie Madekwe) who is a student at an upscale private school and he is gay. This is a highly intelligent, articulate and loving family and Martin’s affair with a goat falls like a bomb on a peaceful meadow. A family friend named Ross (Jason Hughes) finds out about the affair and his reaction may be taken to represent society’s attitude in general.

The production is outstanding in every respect but the performance of the cast as directed by Ian Rickson is an exceptional achievement. Lewis as Martin has to maneuver between explaining his unorthodox behaviour to defending his passion for a goat. Lewis pleads, reasons, yells, becomes angry and impassioned in a superb performance. 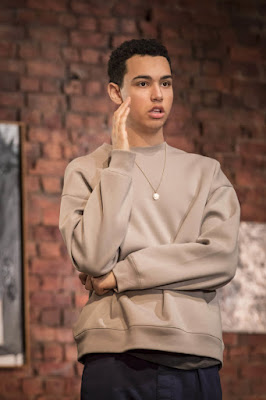 Archie Madekwe. Photo: Johan Persson
Okonedo as the gifted wife has great cause for rage and incomprehension. When her anger boils over she starts breaking furniture, furnishings and everything she can get her hands on. We see physical and emotional destruction in a powerful performance that leaves nothing standing.

Madekwe makes his professional debut as the son, a bright boy who loves his parents and is caught in the crossfire in a situation that is beyond comprehension. In the middle of the excruciating emotional turmoil he displays a brief sexual attraction to his father and kisses him on the lips. It is another layer in the complex psychology of the play that is indeed difficult to comprehend. Madekwe’s performance is brilliant.

Hughes does a good job as the family friend and foil for Martin.
The set by Rae Smith consists of a nice apartment with bare brick walls, modern furniture and plenty of bric-a-bracs for Stevie to break when she wreaks physical and emotional havoc.

A stunning production of a stunning play and a great night at the theatre.
_____
The Goat or Who is Sylvia? by Edward Albee ran until June 24, 2017 at the Theatre Royal Haymarket, 18 Suffolk Street London SW1Y 4HT London, England. www.trh.co.uk