The Stratford Festival has hit a home run with its production of The Changeling. It gets to first base by simply producing this 1622 thriller which has been seen in Stratford only once before, in 1989. It gets to second base for producing a play for which it almost needs to create an audience. The Festival deserves to be criticized for ignoring much unfamiliar Renaissance drama. It gets to home base with a fine cast under the expert direction of Jackie Maxwell.

The Changeling was a big hit in the 1620’s it was popular entertainment and gave Londoners the works: love, lust, murder, madness, a fail-proof test of virginity, comedy and tragedy. After a few more productions, the play was ignored for almost 250 years until it was “rediscovered” in the latter part of the twentieth century. 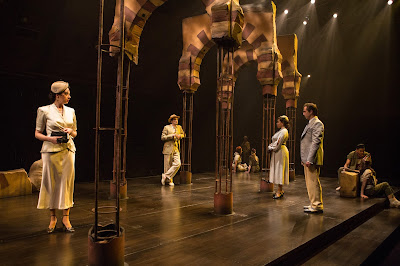 Members of the company in The Changeling. Photography by Cylla von Tiedemann
Jackie Maxwell sets the production in Spain in 1938 at the end of the Civil War when Franco had seized power. As with any placement of an almost 400 year old play in a modern era there are some things that do not fit but you can easily ignore them.

The plot is not as complicated as it looks but a quick read of a summary before going to the theatre may help. There are two plots, in fact, a tragic and a comic both dealing with, you guessed it, love, lust, feigned madness, real lunatics, the changing of the bride and, of course, homicide.

The central character is Beatrice-Joanna (Mikaela Davies), the daughter of Vermandero (David Collins), a local governor and owner of a castle where most of the action takes place. Vermandero orders Beatrice to marry Alonso (Qasim Khan) but she loves Alsemero (Cyrus Lane). The ugly and disgusting De Flores (Ben Carlson) lusts for Beatrice, he lends a hand and takes a finger from Alonso and he has, to put it politely, his way with her.

In the comic plot, Alibius (Michael Spencer-Davis), the priapically challenged owner of a lunatic asylum, appoints his assistant Lollio (Tim Campbell) to protect his beautiful wife Isabella (Jessica B. Hill) from intruders to her virtue. Welcome Antonio (Gareth Potter), who pretends to be a lunatic and gets admitted to the asylum with that very object in mind. Lollio has the same thing in mind and the question is who will succeed? 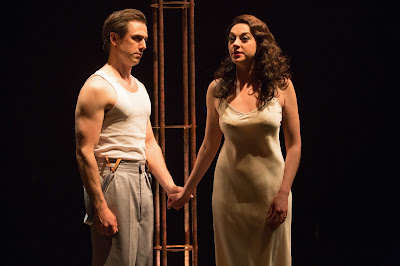 Cyrus Lane as Alsemero and Mikaela Davies as Beatrice-Joanna in The Changeling.
Photography by Cylla von Tiedemann.
Mikaela Davies gives us a Beatrice who is sexually magnetic, ruthless, assertive, cunning and dangerous. Her sleek gown by Costume Designer Judith Bowden doesn’t just reveal, it entices and provokes. Quite a performance. Her waiting woman Diaphanta (Ijeoma Emesowum) has the same sexual propensities as her employer which come in handy in fulfilling the title of the play. Ben Carlson turns in a fine performance as the evil De Flores but there was little attempt to make him revolting except for a blotch of purple skin on his face.

Cyrus Lane’s Alsemero is upright and gentlemanly and he wants us to know that he used sound judgment and not just hormones in falling in love with Beatrice. Khan as Alonso is simply besotted by her and he does not want to hear any arguments.

Potter as Antonio must act the fool and the lover to get to Isabella and he provides some laughter. Campbell as Lollio, with his impressive bearing and booming voice, can be a jail guard or a warden in a movie. The gravelly-voiced David Collins makes a fine Vermandero.

The theatre-in-the-round stage of the Tom Patterson has four arches with brick and mortar on the top. They represent the outside of a church, the madhouse and the castle. A single set by Camellia Koo that does the job. The men wear mostly three-piece suits with the lunatics and others being more modestly attired.

In short, Jackie Maxwell and a fine cast deliver an excellent production of a play that has been ignored for too long.
_____________


The Changeling by Thomas Middleton and William Rowley opened on June 15 and will run until September 23, 2017 at the Tom Patterson Theatre, Stratford, Ontario. www.stratfordfestival.ca
Posted by James Karas at 8:29 PM