THE WEIR – REVIEW OF McPHERSON PLAY AT WYNDHAM’S 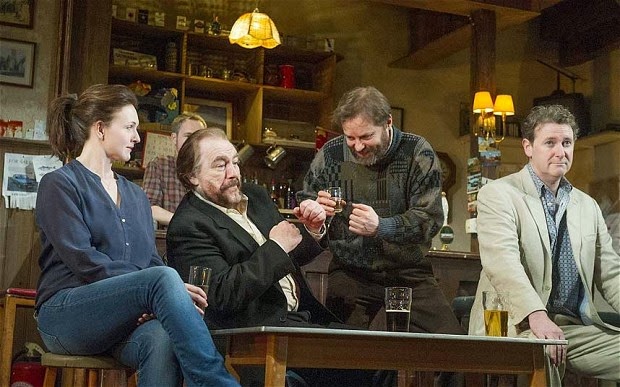 
The Weir is a lyrical play by Conor McPherson that consists almost entirely of memories recalled by five people in a bar in a remote village of Ireland. There is almost no plot and the catalyst for the confessional is the arrival at the bar of a young woman named Valerie (Dervla Kirwan).


Brendan (Peter McDonald) operates the bar where people gather to drink and talk. One of the most talkative ones is Jack (Brian Cox), a mechanic who spends a lot of his time drinking with his friend Jim (Ardal O’Hanlon), a rather dim labourer.


They are joined by the rich and arrogant Finbar (Ristéard Cooper) who comes accompanied by Valerie. She just purchased a house from the flamboyant Finbar who seems to own much of the village.


Valerie is the catalyst for the conversations that follow as each one of the characters delves into memories real or imagined.

Director Josie Rourke steers the cast through memories and ghost stories with us joining the company but not the drinking.


The cast is first-rate in presenting a highly sympathetic rendering of McPherson’s lost souls who tell their stories as confessions or perhaps emotional bridges among them.


McPherson’s lyrical prose, delivered to perfection by the cast has such musicality that you are drawn to the worlds of the characters. The short play strikes me more like a poem than a theatrical piece. This is the third time I have seen the play and I recall the ambience, the music of the words and the characters without remembering much of the soulful tales told by them.


This revival of McPherson’s 1997 play was originally produced at Donmar Warehouse in 2013 and has now transferred to Wyndham’s Theatre.


The Weir by Conor McPherson opened on January 21 and will play until April 19, 2014 at Wyndham’s Theatre, Charing Cross Road, London, WC2H 0DA
Posted by James Karas at 12:50 PM