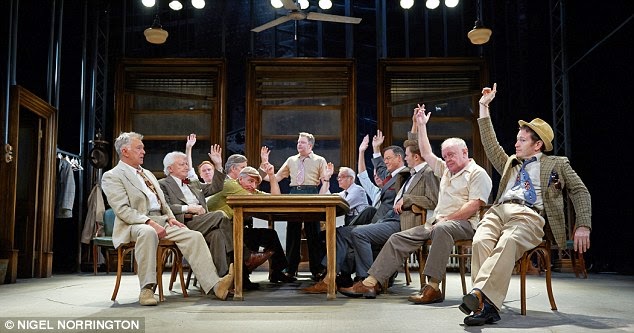 
One benchmark for the quality of a play or of a production is how much you can enjoy the second or third time you read or see the work. This is even more critical when you know the play well and whose dramatic effect depends to a significant extent on not knowing how it will end.


Anyone who has seen the film version or a stage production of Reginald Rose’s Twelve Angry Men will recall that it is about twelve jurors who must decide the guilt or innocence of a young black boy who stabbed his father. Eleven of them, gathered in a sweltering jury room in New York, have no doubt about the guilt of the accused and are quite prepared to send him to the electric chair. One juror has some questions that he wants clarified.


The result is an explosive drama that comes down to a dramatic resolution in the last minutes of the play. If you do not know the jury’s final decision, you are in for a treat. If you do know it, you will still experience a searing drama as if you had never seen the play before. That is the effect of the current production at the Garrick Theatre in London.


Twelve Angry Men started as a TV script but was re-written for the stage in 1955 and, in addition to the superb drama, it gives a snapshot of American society of that era. Some people may say that very little has changed.


Juror 8, played by Marty Shaw, (the characters have no names – just numbers and it can be annoying) is a gruff-looking but soft-spoken architect who has some questions about the guilt or innocence of the accused. He does not express doubts nor is he prepared to vote “not guilty” before he gets some answers. Shaw holds a steady hand on the wheel through some very stormy waters and his performance stands out for its boldness, sagacity and intelligence.


The opposite of Juror 8 is Juror 3 (Jeff Fahey) who is irascible, passionate and a threatening bully who may explode into violence. He gives us a key to his emotional outbursts and unshakeable convictions at the beginning of the play but we probably miss it. Fahey as the juror, standing tall and indomitable will stop at nothing to get a conviction. The knife that the murderer stuck in the victim’s chest is felt by Number 3 as if it were driven in his own heart. I will not spoil it for those who do not know the story but Fahey’s performance is one of the most powerful and emotionally charged that I have seen in a long time.


There are jurors who make their points quietly, others who are flashy and shallow but as a group most of them show a real concern for justice. The one who brings some unintended clarity and provides an emotional peak (one of several) is Juror 10 (Miles Richardson). When he becomes exhausted and emotionally drained from the lengthy arguments, he bursts out with his diseased and disgusting bigotry. Blacks are taking over his racist America and they do not deserve any consideration. This is racist America fully exposed and extent and depth of this juror’s evil awakens some of the others whose judgment was at least subconsciously clouded by the colour of the accused’s skin. A superb performance by Richardson.


Robert Vaughn, old, gray-haired and wearing a bowtie appears a Juror 9. He says relatively little but represents the type of patience and rational thinking that jury panels require.


The jurors represent a cross-section of white American society. The salesman (Nick Moran), the blue-collar worker (Robert Blythe), the advertising executive (Owen O’Neill), the foreign-accented immigrant and watch-maker from Europe (Martin Turner), the hospital worker who grew up in the slums and knows something about switchblades (Ed Franklin), the stock broker (Paul Anthony-Barber), the successful businessman (Jeff Fahey), the shy and indecisive clerk (David Calvitto), the football coach (Luke Shaw).


Even if you have seen the play before, this production, masterfully directed by Christopher Haydon and acted by a first-rate cast, will stimulate, infuriate and confuse you. And that is what theatre is supposed to do, isn’t it.
_______