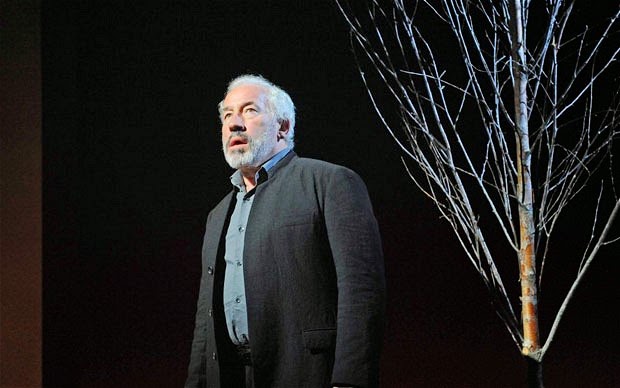 
Simon Callow provides a couple of very pleasant hours of theatre with his one-man show Being Shakespeare at the Harold Pinter Theatre in London.


The show is written by renowned Shakespeare scholar Jonathan Bate and directed by Tom Cairns. Bate structures the programme around Jaques’ speech in As You Like It which is referred to as “The Seven Ages of Man” or “All the World’s a Stage.”


Callow has a marvelous voice and an impeccable delivery of poetry and it was a delight listening to some biographical and historical information about Shakespeare and his times and, of course, hearing some lines from the plays, the sonnets and the poems.


Callow starts with the infant “mewling and puking” and informs us that Shakespeare coined that colourful word for bringing up. Shakespeare was raised very much by his mother, we are told, he wore dresses and his father had very little to do with his upbringing.


Shakespeare attended the local grammar school, a new idea in public education at the time, where he learned grammar, rhetoric and Latin and not much else. Was he a whining school boy with a shining face creeping unwillingly like a snail to Stratford’s new educational establishment? We will never know but there is no doubt that what he learned there stood him extremely well as a writer for the rest of his life.


We know something about the lover who got Anne Hathaway pregnant and had to marry her in a hurry. As to whether he sighed like a furnace, with a woeful ballad
made to her eyebrow, we can only guess at.


After marriage come children, acting, writing and success but where was he for all those years that we know nothing about?


Being an actor, Callow is very interested in Shakespeare’s acting career and even more so in his advice to actors. Henry V’s speech to his soldiers and Hamlet’s advice to the players are in effect acting lessons.


Callow tells the story of the Earl of Essex offering Shakespeare’s company forty shillings to perform Richard II and add a few lines that will hopefully foment rebellion. The company had not done the play for a while but the offer of twenty thousand pounds in today’s money convinced them to learn their lines quickly.


The play went on, the rebellion got nowhere and Essex, Shakespeare’s patron Southampton and their followers were arrested, as were the actors. The latter could have been charged with treason and beheaded but they got off because they were believed when they said they were just trying to make a living.
All the ages lead inevitably to the last scene of all, that ends Shakespeare’s and everybody else’s strange eventful history. When he died at age 52 in his home town, almost no attended his funeral. Francis Beaumont, a second-rate playwright who died around the same time in London, got almost a state funeral.


Callow is a first-rate Shakespearean and, as I said, you get resonant recitations, some facts and a very good night at the theatre.
_______


Being Shakespeare by Jonathan Bate played from February 26 to March 15, 2014 at the Harold Pinter Theatre, Panton St, London, SW1Y 4DN.
Posted by James Karas at 12:59 PM