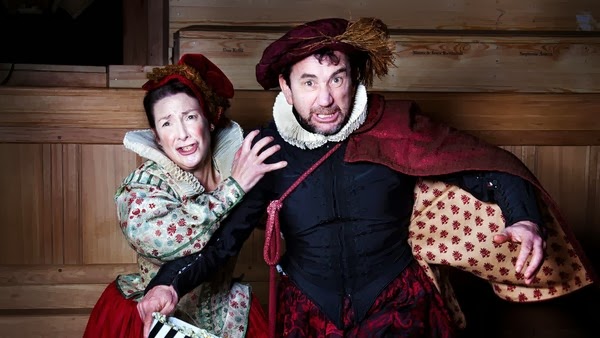 
The Knight of the Burning Pestle is a hilarious play by Francis Beaumont that is now playing at the new Sam Wanamaker Playhouse in Shakespeare’s Globe Theatre, London. It is possible that The Knight has been produced professionally somewhere in Southern Ontario in recent decades but it is highly unlikely. Too bad.


The play was first produced in 1607 when Shakespeare and Ben Jonson were very much around and English renaissance drama was at its height.


We are in London and a play called The London Merchant is about to begin. A Citizen (Phil Daniels) and his Wife (Pauline McLynn) who are seated in the front row object vociferously to the subject of the play. Why are they not putting on a play about common people? The Citizen is a grocer and he wants to see his son Rafe (Matthew Needham) on stage.


So begin the mirth and hilarity. We meet the fired apprentice Jasper (Alex Waldmann) who is in love with the pretty Luce (Sarah MacRae) who happens to be his former employer Venturewell’s daughter (John Dougall) who dismissed him for the very reason. He has a better match for his daughter in Mr. Humphrey (Dickon Tyrrell). There you have the love interest of most comedies – the parents disapprove and the lovers triumph.


Rafe does go on stage as The Knight of the Burning Pestle, we meet Jasper’s family of misfits and a few other characters. There are hijinks and lowjinks as the plots develop with the Citizen and his Wife always ready to interject and interfere.


The cast directed by Adele Thomas create so much energy and laughter one wants to believe that they have captured the rollicking fun of the early seventeenth century free-wheeling theatre. The actors jump into the audience; the Citizen passes grapes to people close to him and serves them beer; there is a chase that goes around the theatre and the laughter keeps rolling in. They sing and dance as well.


Daniels and McLynn have the audience in the palm of their hands. We just wait for them to object to what is happening on stage so we can laugh. Needham as Rafe, looks and acts like a dolt to hilarious effect. The usually drunk Merrythought of Paul Rider, the foolish Humphrey, the blustering Venturewell are all stock characters from comedy but they were done well and fulfilled their mission: leave them laughing.


The Sam Wanamaker Playhouse is a small indoor theatre attached to Shakespeare’s Globe. The small stage and proximity to the audience probably make it easier to involve people in the action and evoke laughter. I need hardly add that seasoned actors and fine directing are the essential ingredients.


I had not seen The Knight or any other play by Beaumont or Beaumont and Fletcher as the two playwrights are usually referred to. Our Stratford Festival has dropped Shakespeare from its name and shows great reluctance in approaching Elizabethan and Jacobean plays because they may not fill the theatres. The Shakespeare Festival should lead us to the whole range of drama and create an audience for it rather than following our limited tastes. Shakespeare’s Globe is doing exactly that by introducing plays that have been largely ignored for centuries.
_________

The Knight of the Burning Pestle by Francis Beaumont opened on February 20 and will play until March 30, 2014 at the Sam Wanamaker Playhouse, 21 New Globe Walk, London. www.shakespearesglobe.com
Posted by James Karas at 11:19 AM