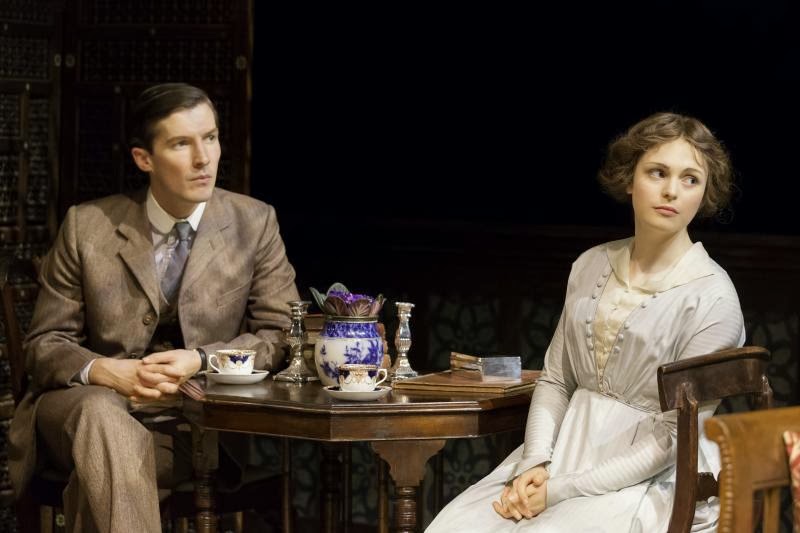 
There is a small genre of plays about significant current events or historical happenings that are important today. Plays about Richard Nixon, Enron, the banking crisis, the war in Afghanistan and the American invasion of Iraq come to mind. The playwright uses actual persons, fictitious or semi-fictitious characters, invents subplots and comments on the events or crisis at hand.


Peter Gill’s Versailles, now playing at the Donmar  Warehouse in London, is very much in that category of drama. This year is the 100th anniversary of the start of World War I but rather than dealing with the summer of 1914, Gill has chosen to dramatize the Paris Peace Conference of 1919.


He has created two upper crust families in Kent for the first and third acts and takes us to Paris for the second act. Mrs. Rawlinson (Francesca Annis) and her children Mabel (Tamila Kari) and Leonard (Gwilym Lee) live in a fine house in the country with servants and all the amenities of class and culture. Their friends Arthur (Christopher Godwin) and Marjorie Chater (Barbara Flynn) belong to the same world but they suffered the tragedy of losing a son in the war.


The Rawlinsons have several visitors such as Constance (Helen Bradbury), Hugh (Josh O’Connor) and Geoffrey (Adrian Lukis) who are necessary for the development of the plot. The play has thirteen characters, all of them gentry except for the servant Ethel (Eleanor Yates).


The play moves on two levels: the interpersonal relations of the characters and the commentary on the peace negotiations in Paris. The tragedy of the Chaters, the homosexual relations of Leonard and Hugh, the romantic attraction of Geoffrey to Constance and Mabel’s lack of interest in romance and matrimony are among the personal entanglements that are intermingled with the political arguments.


The problem with the personal stories is that Gill allows an emotional range that goes all the way from A to B as someone once said. These are Victorian English men and women and we expect reserve but in this play they are practically dead. Mabel does shriek at her mother and Arthur Chater does display momentary emotion at his son’s death but the scene is closed with lightning speed. When the gay men confront each other they are practically standing at attention. There is almost no physical contact.


Perhaps the real point of the play is a critique of the peace negotiations especially the onerous terms imposed on Germany. The protagonist here is Leonard who attends the peace conference and tries desperately to find a compromise position where Germany is allowed to survive economically instead of being plunged into economic crises by the reparations it may be forced to pay.


Gill had to steer between meaningless generalities and hard facts as to the terms imposed on the Germans. Leonard gives us hard facts about the effects of reducing Germany’s coal producing capabilities and foresees social upheaval in the offing. Hard facts require hard numbers and statistics and parts of the play look like a debate among opposing views of the war and its aftermath.


Gill takes some easy shots at the British class system with its sense of entitlement, blindness, snobbery and even stupidity. They learned nothing from the war and all they want is to go back to the good old days as if the devastation did not occur.


Gill directs the play and the cast seems to have no difficulty in handling the roles. Lee as  Leonard is eloquent and fervent in his criticism of the peace terms. Lukis is convincing as a cultured businessman who with some of the others, represents prewar attitudes. Annis and Flynn are good as women who wear long gowns, expect servants to do the work and find discussions of class just boring.


Kari and Bradbury as Mabel and Constance are attractive, educated and independent, more or less, and represent the new woman.


Gill does present some cogent arguments in relation to the Treaty of Versailles and Leonard is prescient in his comments but it is easy to be prophetic one hundred years after the fact.
The Paris Peace Conference was an utterly fascinating gathering of hundreds of politicians, diplomats and experts. Perhaps no play can do justice to the almost six months of complex negotiations. But a first-rate historian can. Pick up a copy of Margaret MacMillan’s Paris 1919 and you will read about fascinating people, extraordinary situations and learn a great deal about the subject.


Versailles by Peter Gill opened on February 27, 2014 and continues until April 5, 2014 at the Donmar Warehouse, 41 Earlham Street, London, England. http://www.donmarwarehouse.com/