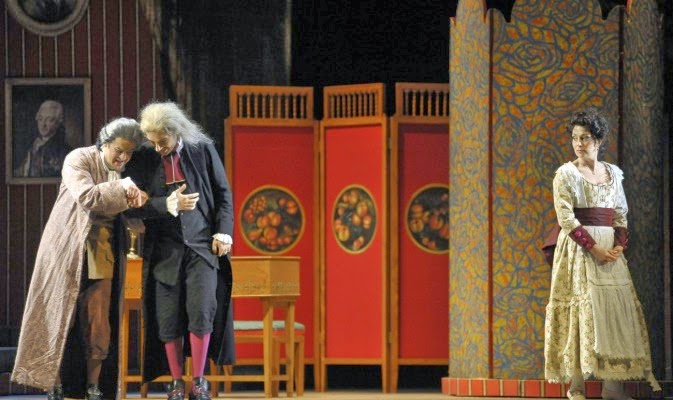 Director Bepi Morassi gives an energetic and well-sung production of Il Barbiere di Siviglia at Venice’s Teatro La Fenice. The sets are kept to a minimum but spirits are high, the singing is generally excellent and the orchestra of La Fenice is in superb form.

Morassi and Set Designer Lauro Crisman have draped off the top and sides of the stage, lopping off about a third of the playing area. This gives the effect of a miniature theatre and the feel that you are watching a delightful play in intimate surroundings. The relatively small and ornate La Fenice helps in creating and sustaining the impression.

The set for the opening street scene where Count Almaviva (Giorgio Misseri) courts the beautiful Rosina (Marina Comparato) is sparse and almost papier mâché in keeping with the miniature theatre idea. The reduced playing area means that the set for the rest of the opera is also limited but elegant.

That sets the stage for opera buffo fun. Tenor Misseri’s approach to his role is not just lively, it is downright athletic. Not just physically, I mean vocally as well. He does not just hit his high notes, he leaps to them with fervor.

He is well-partnered by South Korean baritone Julian Kim as Figaro. In keeping with Morassi’s approach, the youthful Kim attacked the role of the wily barber with vigour and relish and sang superbly. “Largo al factotum” and largo al Julian Kim.

Italian mezzo-soprano Marina Comparato sang the lively and lovely Rosina. Comparato has a lush voice with a beautiful mid-range and an amazing low register. Fair enough that with that type of range, she is not at her best with high notes. But she is and amazing mezzo in the middle and lower registers. And as the decisive, self-assured and I-get-what-I-want young lady, she is just the type of girl you want to love.

The opera is a non-stop conveyor of melodious arias, ensembles and comedy but there are two set pieces that I wait especially to see: Rosina’s “Una voce poco fa” and the Music Lesson. “Una voce” defines Rosina’s character and the singer’s ability to handle all of Rossini’s embellishments. Here Comparato was not at her best when she had to deal with those high notes.

The Music Lesson is full of comedy and melody as the two lovers furtively express their feelings, sing beautifully and fool Bartolo as to what they are really up to. Delightful.

In Bartolo Basilio and Berta, Rossini provides three relatively minor but very juicy roles. Each is provided with comic business so necessary to the opera and an opportunity to show off their vocal dexterity.

Baritone Omar Montanari is Rosina’s foolish guardian Bartolo who wants to marry her. The old boob (Bartolo, not Montanari who seems quite young) is set up as the butt of the romantic liaison between Rosina and Almaviva. Montanari is very adept as a comic and as a singer.

Bass-baritone Luca Dall’Amico is Bartolo’s sidekick, Basilio. The tall singer with his flaxen hair in the role reminded me of Sir Andrew Aguecheek, Sir Toby’s sidekick in Twelfth Night. Dall’Amico gets to sing “La calumnia,” one of the famous arias in the opera and the repertoire and he handles the crescendos with aplomb. He also does his comic business well.
Bartolo’s maid Berta is given some comic business and a nice aria, “Il vecchiotto cerca moglie,” and soprano Giovanna Donadini does well in both.

Giovanni Battista Rigon conducted the Teatro La Fenice Orchestra with verve and every crescendo got its due in a splendid afternoon at the opera.
_____