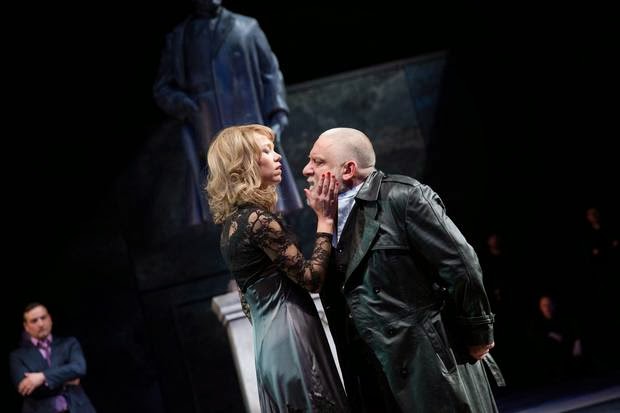 
When you hear that Sam Mendes is directing King Lear at the National Theatre with Simon Russell Beale in the lead, you are well advised to check for flights to London. If you make it, you will see Shakespeare done on a grand scale with some definitive performances for the modern theatre.


Mendes sees Lear as a modern dictator. In the opening scene when Lear demands to hear extravagant expressions of love and devotion from his daughters, there is a large contingent of soldiers in black berets and uniforms in a semi-circle on the large Olivier stage. The division of the kingdom is a public event and Lear explodes into a violent rage, knocking tables over, when he is not satisfied with Cordelia’s answers. We will see soldiers a number of times. Dictators and civil wars need them.


Russell Beale, stocky, stooped, with short-cropped white hair, struts around the stage seething with violence like a beast that wants and gets nothing but obedience. He has a booming voice and is the epitome of dictatorial brutality. He is quickly disabused of his power after giving his kingdom to his daughters. When he curses Goneril and accuses her of filial ingratitude, she stands her ground and slaps him roundly across the face. The game has changed and the king is on his way to humiliation and degradation.


Russell Beale gives an outstanding performance as the pathetic and abused king. His strut becomes a shuffle and in his madness, he rails against the wind and bludgeons the Fool to death. His recovery and realization are extraordinarily moving and his entire performance is one of the finest Lears one is likely to see.


Stephen Boxer’s Duke of Gloucester is a decent man in a smart suit who is as unperceptive as Lear where his children are concerned. The self-assured Duke is humiliated and is subjected to a modern torture technique. He is hooded and alcohol is poured over his face. His eyes are then gouged out using a corkscrew. Boxer gives a wrenching performance during that scene and his trip to Dover where he wants to commit suicide.


Kate Fleetwood is a sharp-nosed Goneril who carries her deeply-rooted evil lightly and smartly and she quickly establishes dominance over her father with a quick slap. Anna Maxwell Martin as Regan is equally evil and she embraces the gouging of Gloucester’s eyes with relish. She is also coquettish and sexy which makes her even more frightful.


Aside from Lear’s and Gloucester’s Promethean suffering and display of emotional extremes, Mendes understates the evil in the heart of most characters. The treacherous and malevolent Edmund (Sam Troughton), Gloucester’s bastard son, is almost business-like in his despicable behavior.


The Fool (Adrian Scarborough) wears a distinctive hat but other that he is in a suit and his clowning is understated. In the opening scene, we see him seated downstage and away from the action. When Cordelia is thrown out, he embraces her. Lear will pay him back for that by killing him. A brilliant move by Mendes.


Stanley Townsend as the faithful Duke of Kent starts as a self-assured and vocal officer and then converts to a more sedate, undercover supporter of King Lear. Again, well-done characterization and detailed reading of the play by the director.


The overall effect of the production is that of a modern nation in a state of war. The stage is dark and threatening clouds are frequently visible. The murky sky is projected by video on the backstage and we hear thunderclaps and airplanes whirring by.


Mendes has done some judicious editing of the text that makes the play move more smoothly.


And if you can’t find a flight or get tickets to the production, all is not lost. King Lear will be shown in movie houses in Canada on May 1, 2014.


King Lear by William Shakespeare opened on January 23 and continues until May 28, 2014 at the Olivier Theatre in the National Theatre, South Bank, London, England.  http://www.nationaltheatre.org.uk/
Posted by James Karas at 5:58 PM