THE IMPORTANCE OF BEING EARNEST – REVIEW OF 2022 SHAW FESTIVAL PRODUCTION

The Shaw Festival has tackled Oscar Wilde’s “perfect comedy” The Importance of Being Earnest for its 2022 season. For those lucky enough to have seen many productions of the great play, there is the problem of “rememberitis,” the recollection of previous performances and the odious impulse to compare. Avoid it.

Director Tim Carroll gives us his view of the play in a production that has many virtues and some infelicitous results. It is a traditional rendering without any directorial flights of fancy. That is a welcome virtue.

The cast is for the most part marvelous. Lady Bracknell is a theatrical marvel and has attracted numerous men and women to tackle the role. It is not the biggest role in the play but it does make the greatest impression and she does have some of the best lines. A gorgeously dressed and impressive Kate Hennig takes on the role. She is sharp-tongued without being imperious and attractive enough to be far removed from a gorgon. She displays her temper and temperament in the final act when she brings Miss Prism to heel and finds out what happened to her nephew. These are important events in the play for those who have never seen it. 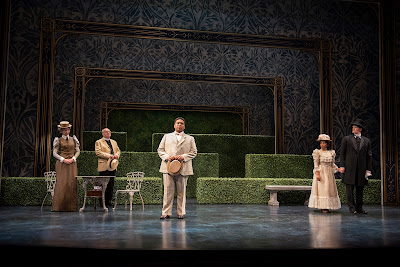 We have two young men and two young ladies to carry the bulk of the play. Peter Fernandes is the impecunious Algernon Moncrieff who must pretend to please his Aunt Augusta also known as Lady Bracknell, while pursuing other pleasures in the country. Fernandes does a good job except in the opening scene where he failed to project his voice. He was with the servant Lane  played by Neil Barclay who could be heard without any difficulty.

Algernon finds his way under false pretenses to his friend Jack Worthing’s country house where he falls in love with the lovely Cecily. She is Jack’s ward, a young lady of 18 who admits to twenty. The petite Gabriella Sungar Singh gives us a perky and delightful Cecily. She is a girl who calls a spade a spade and stands up to the snooty Gwendolen. We love her.

The suave and debonair Jack Worthing a.k.a Ernest is played as such by Martin Happer. He is in love with Lady Bracknell’s daughter, the aristocratic Honourable Gwendolen and he is, of course, considered unsuitable material as a suitor striving much above his social position.

Julia Course as Gwendolen is beautiful and becomingly hoity-toity. Her reply to Cecily’s democratic stance of calling a spade by its name is that she has never seen a spade. They are from different floors of the social edifice. 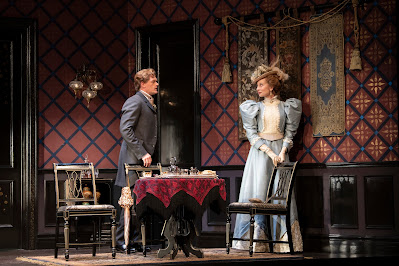 Martin Happer as John Worthing, J.P. (Ernest) and Julia Course as the Honourable Gwendolen Fairfax in The Importance of Being Earnest (Shaw Festival, 2022). Photo by Emily Cooper

Ric Reid as Reverend Chasuble and Jacqueline Thair as Miss Prism make a fine pair and give very good performances. I praise Neil Barkley and Graeme Somerville as the servants Lane and Merriman.

The sets by Gillian Gallow are gorgeous. Algernon’s flat in Act I is tastefully decorated and very pleasant. The set of Act II, the garden of Worthing’s Manor House features a series of well-groomed hedges which look beautiful and provide a few laughs when people lose their way. The drawing room of the final act is more mundane but quite appropriate.

The infelicitous result that I mentioned came from the failure of the production to spark the laughter that the play and the performances deserve. Why was the audience so unresponsive? Did the production simply fail to get them to display their enjoyment of the performance or did they have a heavy meal beforehand and could not produce belly laughs. They gave it a half-hearted standing ovation but it was not enough.

Go see it and laugh to your heart’s content at one of the great comedies of all time.

The Importance of Being Earnest by Oscar Wilde will run in repertory at at the Festival Theatre until October 9, 2022, as part of the Shaw Festival in Niagara-on-the-Lake, Ontario. www.shawfest.com.

James Karas is the Senior Editor - Cutlure of The Greek Press. This review appears in the newspapaer.