Every Little Nookie by Sunny Drake is now playing at the Studio Theatre as part of the 2022 Stratford Festival season. If you saw the play and enjoyed it, do not bother reading this review. You no doubt saw virtues in the play and the performance that escaped me completely and you deserve to keep your pleasant memories.

Let’s meet the eight characters of the play. Kenneth (John Koensgen) and Margaret (Marion Adler) are a middle-aged couple living in a suburb and playing Scrabble and bridge. They have an adopted daughter named Annabel (Rose Twong) who is trying to succeed as an artist while living in a small apartment with three of her friends.

Annabel’s partner is Grace (Khadijah Roberts-Abdullah) and her other friends are Smash (Stephen Jackman-Torkoff) and Crystal (Veronica Hartiguela). We also have Matt (Richard Lam). a separated father who falls in love with Annabel and Phoenix (Robert King) a middle-aged man on the periphery of the group. 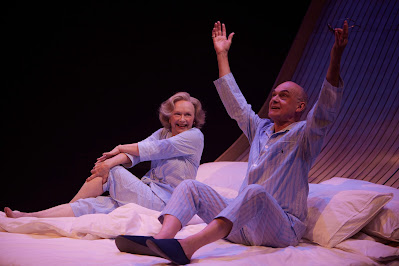 Marion Adler (left) as Margaret with John Koensgen as Kenneth in
Every Little Nookie. Stratford Festival 2022.Photo by David Hou.

Now for the fun part. Annabel and her friends hold swingers’ parties at her parents’ home when they are away. The sexual proclivities of the young are binary, non-binary and a mixture of both and when they speak, they scream, they contort their bodies and do everything to avoid normal speech. On many occasions they are simply incomprehensible and usually very annoying. They look as if they are in some kind of skit where exaggeration is de rigueur and comprehension by the audience is optional.

Margaret and Kenneth find out about the ongoing sex parties and she is intrigued so much that she tells her husband “I need someone in my driveway.” She starts looking for someone to accomplish that and finds Phoenix to occupy her driveway repeatedly. We even see her nude (almost). Kenneth is attracted to Crystal, an academic working on her dissertation who is in a monogamous relationship but works as a sex worker as well. Their relationship seems platonic at a cost of $600.00 per session payable by Kenneth,

Sex is very important in the lives of these people and in the play. There are a few dedicated laughers in the audience but I did not find it even mildly amusing. 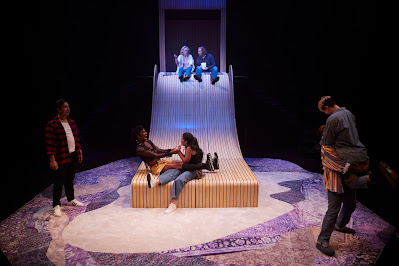 Foreground from left: Richard Lam as Matt, Stephen Jackman-Torkoff as Smash,
Verónica Hortigüela as Crystal, Khadijah Roberts-Abdullah as
Grace and Rose Tuong as Annabel with Marion Adler as Margaret and
John Koensgen as Kenneth in Every Little Nookie. Stratford Festival 2022. Photo by David Hou.
There is a social angle to the play wherein we are served with a serious dose of claptrap about socialism, communism and assisted housing. Some of these people are being evicted and they want to buy a house. They do not have a plug nickel but think that Annabel’s parents can guarantee any debt generated by the purchase of a house.

The set by Michelle Tracey consists of a large slide that forms a bed at the bottom. It is used frequently by all the characters and with so much sex involved it is the appropriate symbol for the play.

The rest is up to director Ted Witzel who instructs the actors to speak and act in obnoxious ways. In the second half of the performance Drake changes the pace and has quick dialogues between different sets of actors. They add nothing to the play and subtract none of the annoyance.

Do non-binary people talk and act like that? Are they oblivious to reality and the best they can do is deliver claptrap about living without really working?  I have no idea and my annoyance had increased to the point where the more than two hours of the performance seems like an eternity.

I tried to figure out who chose the play and why. Perhaps it is intended for a younger audience who may find it amusing? Perhaps. Maybe.