The 2022 Aix-en-Provence Festival is back with a full program of operas and concerts in the gorgeous medieval city. Richard Strauss’s Salome opened the opera season with a production by Andrea Breth featuring the 31-year-old soprano Elsa Dreisig in her debut performance in the title role. There were some marvelous moments and some worthy of complaint.

Let’s start with what I thought was the best part of the production and of Dreisig’s singing. In the final minutes of the opera, Salome has her wish and demand for the head of Jochanaan – John the Baptist – fulfilled when it is delivered to her on a silver platter or a shield, if you are picky. It is the ultimate gratification and ultimate disappointment for her and Dreisig has to express both in powerful and emotional singing. Jochanaan rebuffed her when she wanted to kiss him but now, she can kiss him and bite him like some fruit. But he is dead, and his wild eyes are closed. There is triumph and defeat for the young girl who fell in love with the wild Prophet. Dreisig’s voice soars with anger and emotion and expresses deep regret in a singular rendering of the recitative/aria. 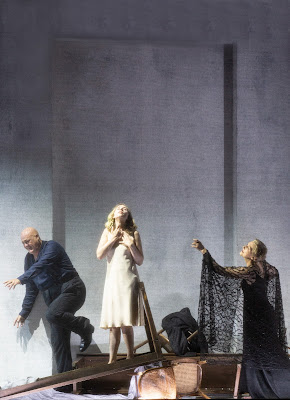 Unfortunately, that does not hold true for Dreisig’s performance throughout. She does not have a big voice and on some occasions, she was drowned out by the orchestra, and she compared uneasily with the other singers who outvoiced her. Breth presents Salome as a teenager with Herod, her stepfather, lusting after her while she develops a passion for the imprisoned Baptist. She is a sweet girl who sings very beautifully but a bigger voice would have been nice. But she rose to the occasion in the last minutes of the production in a bravura performance.

Andrea Beth’s production was interesting if not entirely satisfactory for other reasons. The opening is somewhat confusing as we settle in for a dark and foggy set showing the open cover of a tomb, or maybe a cistern in this case. The scene which is supposed to be on a terrace lasts for forty-five minutes and only Salome is lit by the moon. After a while you want to see what is going on, more than you want to appreciate the director’s vision, or the set designer’s (Raimund Orfeo Voigt) and lighting designer’s (Alexander Koppelmann) view of the darkness of the soul.

For the party scene, the set consists of a gray backdrop with a large table where Herod and his guests sit for the banquet. It is not much of a banquet or a party. Everything happens behind that table until Salome agrees to satisfy her stepfather Herod’s request for a dance at any price.

Salome’s dance, with or without seven veils, is traditionally a very important part of the opera. With Breth’s vision of Salome as a young, innocent girl, perhaps we are not entitled to expect a sexually charged dance that would satisfy Herod’s lust. We get almost nothing. Choreographer Beate Vollack produces four Salomes doing some steps, but it is a long way from any kind of dance. Is it because Dreisig cannot dance or did Breth think what we see qualifies as Salome’s Dance? It does not.

The other central motif of the opera is the decapitation Jochanaan and the presentation of his head to Salome. There may be a decapitation but there is no head visible. All that Salome gets is a large bucket and we assume that the Baptist’s head is in it. She sticks her head in the bucket to give the much-desired kiss on the mouth to Jochanaan and comes out with blood on her face. We saw Jochanaan’s head at the beginning of the performance when he looked out from the cistern and the reason for not showing us his head after it was severed from his body is a mystery to me.

The other singers deserve unstinting praise. Tenor John Daszak heroically sings the dirty-minded Herod. Herodias is his wife, the mother of Salome and the former wife of his brother. Yes, welcome to Hamlet. Angela Denoke is a first-rank soprano who sings marvelously and illustrates how she was able to nab her brother-in-law after her husband “disappeared”.

Strauss’s third opera has some wild music that the Orchestre de Paris under the baton of Ingo Metzmacher played with great fervor and volume. The one-act opera lasts for about one hour and forty minutes with no intermission. It is based on Oscar Wilde’s play of the same name

Salome by Richard Strauss opened on July 5 and will be performed a total of five times until July 19, 2022, at the Grand Theatre de Provence, Aix-en-Provence, France. www.festival-aix.com

James Karas is the Senior Editor - Culture of The Greek Press. This review appears in the newspaper.