Moses and Pharaoh (or Moïse et Pharaon if you prefer the French title)  is a grand opera by Gioachino Rossini that is rarely produced to the point that many of us have not even heard about it. The Aix-en-Provence Festival has run into the breach by producing a highly creditable production for the post-covid era.

The opera has many fine points but it also contains some lacunae that will make you scratch your head at three and a half hours of  a performance that starts at 9:30 p.m. It may also test your stamina to stay awake. It is performed at the Theatre de l’Archevêché  with its open roof which means we have to wait for darkness to set in before the performance can begin.

Moses and Pharaoh is about the exodus of the Hebrews from their captivity in Egypt. If you have not read your Bible or seen Cecil B. DeMille’s The Ten Commandments, you should, because you will get a good idea about the plot there. Director Tobias Kratzer and Designer Rainer Sellmaier have a few surprises and some are not pleasant ones.

The opening scene takes place in a modern office where men in modern suits are discussing or negotiating something. They are quite animated but we do not hear what they are saying.

On the left side of the stage, we see a modern refugee camp. The people are dressed reasonably well and there are no signs of despair but they do want to get out of Egypt and go to the promised land of Israel. 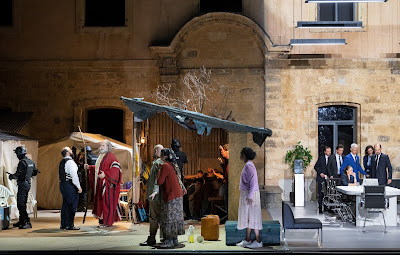 One man stands out because he wears a completely different costume from the others and he is none other than Moses. Think of Charlton Heston in The Ten Commandments and you will get a precise picture of what he is wearing. Staff in hand and flowing robe, he looks as if he stepped out of the Old Testament. Michele Pertusi in the role has a marvelous, resonant baritone voice and he exudes authority. We do not argue with Moses  because he also has the ear of God and Pertusi because he has the voice and bearing to perform the role.

We know something about the negotiations and miracles preceding the exodus of the Hebrews from Egypt but Luigi Balocchi and D’Etienne de Jouy, Rossini’s librettists have added a love interest. Anna (I am using the English names of the characters for convenience), Moses’ niece is madly in love with Amenophis, the son of the Pharaoh! Is she going  to give up her faith or will he renounce his pharaohship and trek across the desert to Israel?

Soprano Jeannine De Bique as Anna has a marvelous voice and she can leap across octaves like Superman can leap to the top of buildings. Not always in complete control but she still delivers a highly accomplished perfromance. Samoan tenor Pene Pati has a supple voice that reminded me of the youthful Juan Diego Florez but again with some control issues.

Mezzo-soprano Vasilisa Berzhanskaya as Amenophis’ mother Sinaide turns in perhaps the best performance of the night especially in her rendition of  “Ah, d’une tendre mère,”  in which she implores her son, tenderly and lovingly, to forget Anna and marry the  Assyrian princess chosen for him. It is a long recitative and aria and Berzhanskaya gives a bravura and memorable rendition.

Bass-baritone Adrian Sampetrean gives a solid performance as the troubled Pharaoh  who is buffeted by a desire to keep the Hebrews and the powerful miracles performed by Moses’ God.  He is responsible for some of the plot twists such as promising to let the Hebrews go and then going back on his word. Moses has God’s ear and he asks and gets some pretty awful stuff, like plagues, drought, floods and very destructive storms. 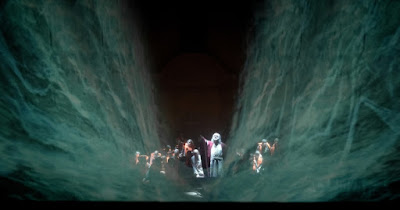 The production has some graphic videos of droughts, floods and storms, all shown to us on television news reports.

The Egyptians are not convinced and they gather in a temple to praise the mother of the goddess Osiris. They have dancers to entertain them and we are treated to an interminable ballet. The faithful in the temple start fidgeting (or is it my imagination?) the Pharaoh gets up and with every such move we think the dance is over. But it is not.

The Pharaoh finally relents and lets the Hebrews go. We have to get the parting of The Red Sea and the exit from Egypt. As we all know the Red Sea will part and we see it doing just that on a powerful video. This may not be de Mille, but it is impressive enough.

The Egyptians decide to give chase and we see men in suits and smartly dressed women in high heels running across the desert to catch the Hebrews. No horses, no soldiers just people from their office jobs running to catch up with enemy. It’s all on video of course. They catch up and the Red Sea engulfs them. We get some dramatic views of people swimming, sinking and eventually their corpses floating on the water.

It is a memorable production with some superb singing and interesting ideas. But women in high heels chasing the Hebrews across the Red Sea? No need to worry about it, I suppose. We know the Hebrews made it.

James Karas is the Senior Editor - Culture of The Greek Press. This review appears in the newspaper.