Louisa May Alcott’s novels have been a rich source of material for adaptation for the theatre and film. The Stratford Festival has chosen to showcase Little Women as part of its Schulich Children’s Plays and all indicators are that it is a brilliant choice. Playwright Jordi Mand’s adaptation and Director Esther Jun’s handling capture the humour, love, loss and sentiments of the March family in 19th century Concord, Massachusetts and give us a wonderful three hours at the theatre.

Mand opens the play with a young woman and a big, old-style family trunk on an empty stage. The trunk, of course contains family heirlooms and memorabilia and when it is opened three women come out of it. Jo, Meg, Beth and Amy are the four March sisters and we will follow their lives from the American Civil War when we first meet them to well after it. The adaptation will take us through their ambitions, love, marriage, birth and death in an absorbing fashion.

The central character is Jo, a feisty individualist who breaks the mold of the submissive 19th century woman. She intelligent and ambitious and wants to become a writer. Allison Edwards-Crewe gives an energetic performance that at times I felt verged on over-acting. Edwards-Crewe can do anything with the role, and I think directorial prudence would have helped her performance. Like her creator, Jo becomes a writer, does not marry and in the end establishes a school. We applaud Jo and Edwards-Crewe. 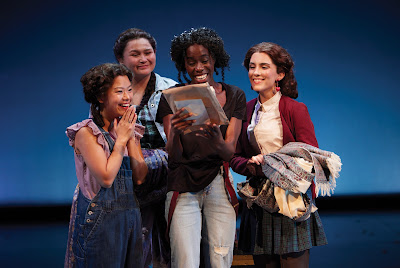 From left: Lindsay Wu as Amy March, Brefny Caribou as Beth March,
Allison Edwards-Crewe as Jo March and Verónica Hortigüela as Meg March
in Little Women. Stratford Festival 2022. Photo by David Hou.
The other nine actors represent more than twenty characters, but the sisters and the mother deserve special credit. Brefny Caribou has the role of Beth March, Veronica Hortiguela plays Meg March (as well as the Parrot) and Lindsay Wu is a delightful Amy March. Irene Poole plays their mother whom they call Marmee.  They give superb performances.

There are many satellite characters such as the crotchety Aunt March of Marion Adler and the young men who will court the “little women.” Stephen Jackman-Torkoff has three such roles, Richard Lam has only 2, and Ryan Wilkie has the role of Mr. March (the father) as well as Professor Bhaer. The doubling is done seamlessly and many of the other roles are as party guests.

Designer Teresa Przybylski has created a brilliant set. The play is set in some seven locations and Przybylski uses a few moveable panels and simple pieces of furniture to indicate changes of place. Some scenes are very short, and no time is lost in making the change. How can you keep track of where you are? There are “photos” of each location at the top of the stage. When we are in the March house in Concord, the appropriate photo is lit. We have scenes in Paris, New York, Aunt March’s house and others and we always know the location. Excellent work.

The production features some modern music which is accompanied by some dance steps. Flailing arms, body contortions and jumps do not dancing constitute. Or so I thought until I realized that the audience just loved the music and the dancing. Something similar happened during the final curtain call when the actors took strange poses (I thought) but the audience just loved what they were doing. If there were moves or reactions that would strike older viewers as odd, just ignore them. Esther Jun clearly knows her audience of young people and understands their tastes. They loved the show.

Little Women was a blow for women’s rights and freedoms more than 150 years ago. It supported domesticity, family ties, love, and freedom of choice. A woman could have a career and not marry; she could choose her mate freely. In other words, Louisa May Alcott spoke to young people in the 19th century in a voice that is comprehensible and applaudable today. At the Stratford Festival, the humor, humanity, adventures, love, marriage, birth and death are all captured in a marvelous and thoroughly enjoyable production.

Little Women by Jordi Mand based on the novels Little Women and Good Wives by Louisa May Alcott continues in repertory until October 29, 2022, at the Avon Theatre, 99 Downie Street, Stratford, ON N5A 1X2. www.stratfordfestival.ca