The Stratford Festival offers us All’s Well that Ends Well, one of Shakespeare’s least produced problematic plays. It’s not something we are not used to when we have plays like The Merchant of Venice, The Taming of the Shrew and others but All’s Well may be tougher to crack than even those plays.

Director Scott Wentworth understands the contradictions and complications of the play and delivers a production that does not minimize the issues. All’s Well is a comedy, it has a happy ending after all and there are a lot of laughs in some of the more outlandish scenes. There is also the core story where a virtuous woman has to pull quite a sleight of hand by fraudulently placing herself in her lover’s bed and becoming pregnant

Whatever the problems, we must note that All’s Well has a highly notable pedigree in the history of the Stratford Festival. It was the second play that was produced at the Festival in July 1953 following King Richard III. Those were the only two plays that inaugurated the Festival and both were directed by the redoubtable Tyrone Guthrie. We are now in the 70th season of that Festival and I look back with borrowed nostalgia at the 1953 cast. Alec Guinness played the King of France, Irene Worth played Helena, Don Harron played Bertram and Douglas Campbell played the clownish Parolles.

It is a worthy successor to Guthrie’s production from what we can tell from some of the reviews of the 1953 showing. Wentworth and his Designer Michelle Bohn have set the play in 19th century England – black suits, top hats, tails. Guthrie had set the 1953 production in World War II. 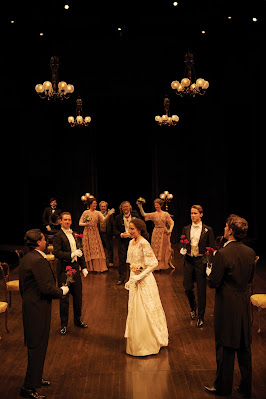 Jessica B. Hill as Helen with Ben Carlson as the King of France
and members of the company in All's Well that Ends Well. Stratford Festival 2022.
Photo by David Hou.
The pivotal character in the play is Helen or Helena, the daughter of a famous but poor doctor, living with the Countess of Rossillion. In a nice touch, Wentworth opens the performance with a funeral which happens to be that of Count Rossillion which explains why his son Bertram is sent to the King of France to become his ward. Briefly, the king is sick, Helen is the only one who can cure him, she does and the king offers her Bertram as her husband. He does not want her but is willing to take her if she removes an ancestral ring from his finger and becomes pregnant by him.

Jessica B. Hill gives a superb performance as Helen. She is a woman in love and will do anything to win Bertram even though he has hightailed it to Italy to fight in some wars. Achieving the two conditions set by Bertram seems impossible but Helen is not about to give up. Bertram is about to bed a woman but Helen arranges for a swap. She gets the ring and becomes pregnant. You may wonder as much as you want about the wisdom of Helen’s actions but Hill never waivers in her representation of a woman of principal and virtue and neither should you.

Ryal Wilkie does a fine job as Bertram but that does not raise his character in our estimation. We can make excuses for Bertram (young, naïve) but cannot argue about Willkie’s performance. 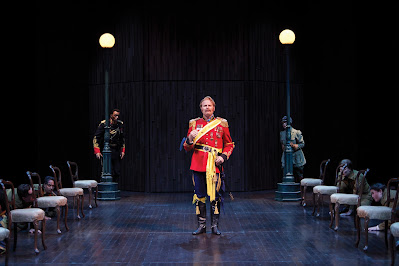 Rylan Wilkie as Parolles with Michael Blake (left) as First Lord Dumaine,
Irene Poole as First Soldier and members of the company
in All's Well that Ends Well. Stratford Festival 2022. Photo by David Hou.
The inimitable Seana McKenna is Bertram’s mother, the Countess of Rossillion, and the latter  is a paragon of strength and virtue while McKenna is a paragon of acting.

Ben Carlson is King of France and his performance is in the usual high standard that we expect of him.

All’s Well that Ends Well provides rich opportunities for comedy  that takes you away from miracle cures, betrayal and woman-swapping. There is a subplot involving a clown called Parroles, a companion of Bertram. He is a classic liar and braggart and he is eventually gulled and humiliated by other officers. He is dressed in a bright red officer’s tunic and yellow scarf and played for the fool that he is. Gullying has elements of cruelty and this one is no exception but it happens to be very funny and Wilkie gets full marks for a superb performance. There are numerous opportunities for laughter and Wentworth takes advantage of them.

All’s Well remains a problematic play but Wentworth’s intelligent and astute handling provides us with a superb production.  We are happy to see it whether we go back imaginatively to 1953 or simply enjoy the treatment of the play in the new Tom Patterson Theatre.