EVERYBODY – REVIEW OF 2022 SHAW FESTIVAL PRODUCTION

Everybody should see Everybody.

Everybody is a marvelous play by Branden Jacobs-Jenkins. It is about someone called Everybody who is summoned by God through his messenger Death to appear before him and give a report or presentation of what he did during his life on earth. Everybody, as the word clearly states, means EVERYBODY, all of us. Is that clear?

Let me digress. You may have heard of a medieval morality play called Everyman. It deals with the same subject and bears much similarity to Everybody.  Jacobs-Jenkins has brought forward and metamorphosed the 16th century play into a modern intriguing, funny and fascinating piece that is different and refreshing in many respects.

There are 10 actors in the production and six of them are listed in the cast list as Somebody. We are told that each of them has memorized 14 different roles and who plays whatever role is decided by a lottery during each performance. We “see” the names of the roles each actor is to play divvied up on the stage.

The play is about to begin, and an usher tells us to turn off our cell phones, take a cough drop, and unwrap our candy. She says a lot more including information about the play and its medieval predecessor as she walks nervously across the playing area of the Studio Theatre. She does a superb job and is hilarious. She is not an usher but the actor Deborah Hay. She will also play God and Understanding. 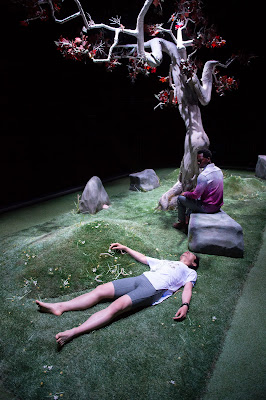 in Everybody
(Shaw Festival, 2022). Photo by David Cooper.

Everybody in the performance that I saw was played by Julie Lumsden. The other five Somebodies were Patrick Galligan, Michael Man, Kiera Sangster, Travis Seetoo and Donna Soares. Andrew Broderick played Love and Alana Randall played Girl and Time.

Everybody gets the message that he will not come back from wherever he goes to meet God but he is permitted to bring “someone” to go with him. Most of the play is taken up, hilariously and seriously, with Everybody trying to recruit someone to accompany him. Then he wakes up. Aha, he is having a bad dream. Or is he?  In the dark, he has a chat with voices listed as A, B, C and D. There are several scenes in the play that are done in the dark and who the first 4  letters of the alphabet are we know not.

He then approaches allegorical figures such as Friendship, Kinship, Stuff, Mind, Five Senses, and Understanding. None of them shows any enthusiasm for joining him to face God, whoever he may be. four skeletons appear doing the Dance Macabre. Everybody has done some Good Deeds and Love also appears. Understanding calls out four virtues, Strength, Beauty, Mind and Senses, They all agree to accompany Everybody until they realize what his destination is and then they fly in the opposite direction.

Everybody is the central and toughest character in the play and Lumsden performed it brilliantly. There are some long speeches, some funny and some serious and she did outstanding work throughout.

Sharry Flett is superb as Death, the obedient servant of God, the ironist with a sense of humour.

Director Lazlo Berczes handles the large and talented cast with care and discipline that adds up to excellent theatre.

The set by Balazs Cziegler represents “Everywhere” in the open stage of the theatre-in-the-round Studio. A dried out, curved tree trunk with some flowers on its branches could be the tree of life or death. Large rocks and greenery on the floor, a hole for the entry into the final resting place or the way to another world are some of the touches provided by Cziegler.  They are minimalist and effective.

The story of Everyman captivated the imagination of medieval man and it became a play before the time of Shakespeare. The play has been produced ever since and Jacobs-Jenkins’ modern brilliant and imaginative rendering makes for delightful theatre and a marvelous production at the Shaw Festival.

Everybody by Branden Jacobs-Jenkins continues until October 8, 2022, at the Jackie Maxwell Studio Theatre as part of the Shaw Festival in Niagara-on-the-Lake, Ontario. www.shawfest.com.

James Karas is the Senior Editor - Culture of The Greek Press. This review is published in the newspaper.