TOO TRUE TO BE GOOD – REVIEW OF 2022 SHAW FESTIVAL PRODUCTION

At the end of Act I of Too True To Be Good, Bernard Shaw through a part in his play called The Microbe, tells us the “the play is virtually over but the characters will discuss it at great length for two acts more.”  The Microbe’s statement is no doubt made ironically but after seeing the play you may think that there is much truth in it.

The Shaw Festival is producing the play (written in 1931 when Shaw was 74) for the fifth time since its first appearance in Niagara-on-the-Lake in 1974.

Director Sanjay Talwar gives us a vigorously acted production with an excellent cast but the plot and Microbe’s information about discussing the play at great length for two acts provide some sections that force one’s mind to wander.

Donna Soares as The Patient (Miss Mopply) with (l to r) Graeme Somerville
as The Burglar, Neil Barclay as Colonel Tallboys, Jenny L. Wright
as Mrs Mopply and Patrick Galligan as The Elder. Photo by Emily Cooper.

The first act is fairly robust and Talwar gives it a brisk pace. The funny Microbe (an extravagantly dressed Travis Seetoo) complains about catching the measles from Miss Mopply (Donna Soares), a spoiled rich brat who is ill and in bed. Mrs. Mopply, her mother, (Jenny L. Wright) is vicariously hypochondriac and fusses frenetically about her daughter. The limping doctor (Martin Happer) prescribes pills as demanded by the mother whether they are needed or not. An officious Nurse (Marla McLean) arrives, she is joined by a Burglar (Graeme Somerville) and they take the patient and her jewels and take off for the beach in a mountainous country.

There are witty lines that work and the act is acted splendidly and all works well.  In the second act the three runaways have changed character. Miss Mopply has become a servant of the nurse who has become a Countess and the burglar has become The Honourable Aubrey Bagot.  We meet Private Napoleon Alexander Trotsky Meek (Jonathan Tan) whose character is indicated by his names. Colonel Tallboys (Neil Barclay) is a typical inept officer almost straight from operetta.   There is some fun as we learn about the Private who resigned his position as a colonel to become a private. He is intelligent and efficient based on Lawrence of Arabia who also resigned his commission.

Religion, Politics, leadership and war are discussed with wit and interest but the plot is not there. The colonel is in the mountainous country looking for the bandits who abducted a girl from England. She is is in front of him with her abductors but he has no clue about it. In act III the Burglar’s father (played dramatically by Patrick Gallegan) arrives. We meet a Sergeant Fielding (played by Martin Happer), the discussion continues about everything almost, with exception of the crime that was supposedly committed in Act I and the search for the bandits that were supposed to have done it. 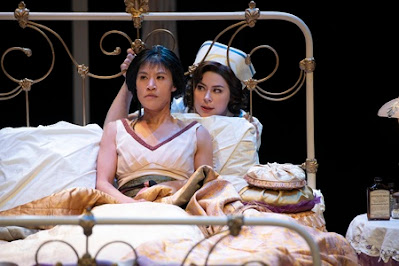 Donna Soares as Miss Mopply and Marla McLean as The Nurse in
Too True to Be Good (Shaw Festival, 2022). Photo by David Cooper.

The set by Sue LePage is modified to fit the rectangular playing area of a theatre-in-the round. The necessary bed in the first act is replaced by a few poles that should be the beach and some rocks that are supposed to represent  a narrow gap leading to the beach. It is a minimalist set befitting the demands of the shape of the playing area.

The cover of the programme shows the symbol of Covid-19. The world of 1931 and the world of 2022 are in turmoil, the first because of the effects of World War I and the second because of the pandemic. There are memories of the Great War interspersed in the play the way the pandemic may be remembered a few years from now, as the world turned upside down and changing quickly and perhaps horribly forever.

During the very long speech by The Honorable Aubrey Bagot at the end of the play, two actors in their street clothes walk across the stage and out of the theatre. Has the political extravaganza run out of steam and everybody is walking out? Members of the cast finally come on stage, put Aubrey on their shoulders and carry him out. The Elder who has been listening to the speech in stunned silence is surprised at what is happening as the audience applauds the end of the show. The audience is relieved too.

Talwar has done impressive work in directing the play and bringing out the best of it with the fine cast. But at 74 Shaw had reached his best-before date and Too True To Be Good cannot be rescued completely from its verbosity however he may have tried.

Too True To Be Good by Bernard Shaw continues until October 8, 2022, at the Jackie Maxwell Studio Theatre as part of the Shaw Festival,  Niagara-on-the-Lake, Ontario. www.shawfest.com.

Jmaes Karas is the Senior Editor - Culture of The Greek Press. This review appears in the newspapr.