You may have heard of Patrick Hamilton’s Gaslight which played at the Ed Mirvish Theatre in Toronto, about six years ago. The Shaw Festival has produced a new play by Johnna Wright and Patty Jamieson based on Hamilton’s play and it is now playing at the Royal George Theatre in Niagara-on-the-Lake.

Gaslight is a redoubtable mystery play in the original and new versions. In the Wright/Jamieson version, we have a happy couple, living in a large Victorian House in London in 1901. Make no mistake that Jack Manningham (Martin Happer replacing Andre Morin) loves his wife Bella (Julie Lumsden) and she loves him.

In theatrical chronology, that can only last for a few minutes. Who wants to watch a happy couple for longer than that? No one. Therefore, the authors start strewing breadcrumbs like Hansel and the audience tries to follow the various paths. Who took the picture off the wall? Who took Bella’s pearls? What are those noises coming from the attic every night? What is Jack doing at his club every night? Why is the gaslight dimming every night? Where are the rubies? There was a robbery in that house and worse. Not to mention the issue of Bella’s mother.

The evidence may lead to an inescapable conclusion: Bella is nuts and she has to be sent to a lunatic asylum. 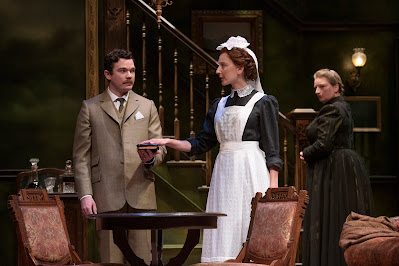 Elizabeth (Kate Hennig) the old and faithful maid seems prepared to confirm that Bella is wacko. Nancy (Julia Course) the new, attractive maid raises more questions and suspicions. Is she doing something more than dusting with Jack? We refuse to believe it.

In the original version of the play, there is a police inspector and two policemen. These three characters are eliminated by Wright and Jamieson and the other characters are drawn differently.

Happer, the understudy, replaced Morin in the performance of June 11, 2022, and he did a good job as the fine, sympathetic and understanding husband. The frightened and terrorized Bella is acted convincingly by Lumsden. Hennig makes a faithful and officious Elizabeth and Course’s Nancy is sassy and somewhat scary. The accents are Canglish with Course handling a broader if unrecognizable intonation that could be an amalgam of Irish and Scottish. I only wished that she would speak a bit more slowly so that I could understand all that she was saying. 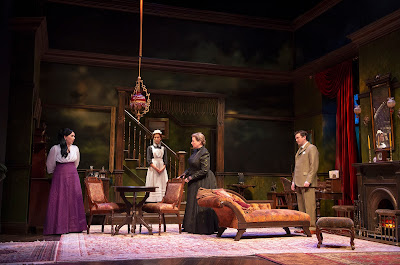 Julie Lumsden as Bella, Julia Course as Nancy, Kate Hennig as Elizabeth
and André Morin as Jack in Gasligh. Photo by David Cooper.

The set designed by Jutish Bowden is a marvelous representation of a Victorian home of our imagination. The walls are dark, red velvet and walnut furniture dominate and the lighting dims at appropriate times to intensify the mystery before us.

There are a number of costume changes over the days (I assume) that the play takes place. Bella wears some very attractive long gowns and Jack wears what we must assume are Saville Row suits.

The changes in time necessitate breaks in the action and the time is filled with original music by Gilles Zolty. There is nothing wrong with the music, but there seemed to be too many such breaks which delayed our discovery of the solutions to the buildup of mysteries.

Kelli Fox does a fine job directing the piece and keeps us entertained.

Everything is cleared up in the end but, alas, I cannot tell you how.

Gaslight by Johnna Wright and Patty Jamieson based on the play by Patrick Hamilton continues until October 8, 2022, at The Royal George Theatre as part of the Shaw Festival, Niagara-on-the-Lake, Ontario. www.shawfest.com/

James Karas is the Senior Editor – Culture of The Greek Press. This review appeared in the newspaper
Posted by James Karas at 11:51 PM