The title of the show, 2 PIANOS 4 HANDS, tells you almost nothing about what you will see if you go to the theatre. Ted Dykstra and Richard Greenblatt are two brilliant showmen and talented pianists and the show that they have created is witty, intelligent, hilarious and totally unexpected.

Yes, it does involve two pianos that are played by Dykstra and Greenblatt but that is only, dare I say it, a small part of the show. The two men are on stage to play the piano and they do very well when they want to, but much more importantly, they cannot control their innate talent for comedy. They want to entertain us, they want us to laugh, they want to move us and they do.

They start with some Victor Borge type tomfoolery about bowing to each other, figuring out which piano to play and getting their own bench. They give us a dose of J.S. Bach’s music. But what they want to tell you about for starters is about piano lessons at a young age. Sister Loyola is drilling them about how to hit the keys – wrist down, fingers bent and then she goes off for a nap. They must learn about time signatures. What is 4 4? Yes, it is 4 on top of 4 but what is the top 4 supposed to mean? And the bottom 4? Think of a dollar; how many parts is it made of? Two bits. All of it done with the audience roaring with appreciation.

Parents trying to force kids to practice. No practice, no allowance. Practice or no TV. 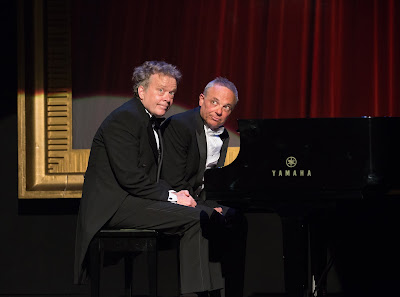 Kiwanis Music competitions for kids under 11 with officious hosts and judges. The judge with an accent that tells them which “piss” they will play. And how many contestants are going to play the same “piss” over how many days?

Dykstra and Greenblatt are master imitators and they change their manners, voices and gestures to play parents, teachers, judges and hosts. They are natural comedians and excellent piano players. Even if you never had a piano lesson at any age, you would recognize their reactions.

There is the inevitable confrontation with the father who wants his son to get better marks in high school and go to university. The teenager wants to do nothing but become a pianist. A huge argument ensues. A talented musician thinks that practising a couple of hours a day is enough. The Conservatory judge tells him he will not get anywhere. Try practising five hour a day, he advises.

There are those who develop a passion, a determination to succeed at any cost and a dream to become a great concert pianist, a star. That dream is achieved by very few and most who have put in the enormous effort end up …who knows where. Perhaps playing in a cocktail bar.

Dykstra and Greenblatt play sections from over twenty musical compositions for the piano ranging from the classics (Mozart, Beethoven, Chopin, Liszt) to modern composers (Hoagy Carmichael, Billy Joel, Richard Rodgers/Lorenz Hart and Richard Greenblatt himself). Some pieces are played for humorous effect but much of the time they display their high ability on the piano. Playing the gorgeous first movement of Bach’s Concerto in D minor and Schumann’s soaring Fantasiestucke No. 2 is no joking matter.

It is difficult to convey the charm, musicality and the enjoyment of watching and listening to these highly talented and simply wonderful musicians and actors. 2 Pianos 4 Hands originated 25 years ago and it has toured the world, one might say, and it is still with us.

Don’t miss it. It is unbelievably good.

James Karas is the Senior Editor - Culture of The Greek Press, Toronto