If you were to holler “Damn Yankees” in certain areas of, say Georgia or Alabama, you are likely to get an expression of enthusiastic approval for wanting to dispatch people from the northern America states to a place that is not air conditioned.  The Shaw Festival is not contemplating that with its production of Damn Yankees, a musical about baseball with an unorthodox and unexpected twist. It combines the battle between baseball teams from New York and Washington with the devilish Faust thrown in for good measure.

Damn Yankees was a hit when it opened in 1955 but it lay mostly dormant for about 40 years with occasional revivals. A film was made in 1958 and there was a major revival on Broadway in 1994.

But I digress. What is Faust doing in a musical about baseball? Well, in the good old days of the 1950’s the New York Yankees dominated baseball to the humiliation of most other teams. The Washington Senators (the baseball team, not the legislators) were the losers of the era and a devoted fan sold his soul to the devil so he could become a great baseball player and defeat the hated Yankees. 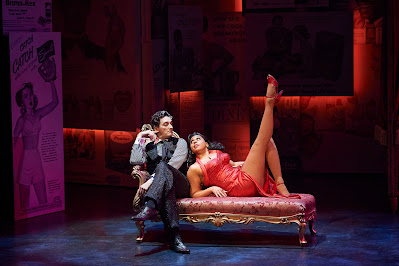 The Shaw Festival gives the old school try to the production and it scores some successes. Director Brian Hill has to deal with a very large cast while Music Director Paul Sportelli and Choreographer Allison Plamondon have a complex musical score and tough dance routines to handle. Set and Costume Designer Cory Sincennes has to deal with numerous scenes that require quick changes. In short, it is a tough and demanding  musical to stage.

The plot revolves around Joe Boyd (Shane Carty), the fanatic baseball fan and his hapless wife Meg (Patty Jamieson) who becomes a baseball widow for six months of the year when her husband is glued to the TV or in the stadium watching baseball. He sells his soul to “Applegate”, who is none other than Faust. Joe Boyd is transformed into Joe Hardy (usually played by James Daly but replaced by Drew Plummer on June 9, 2022) and becomes a great baseball player. We also have Lola (Kimberley Rampersad), Applegate’s seductive assistant.

If the Faustian story of your-soul-for-whatever-you-want is a myth but so is idyllic America in the 1950’s. The wives are dimwits who exist to endure their husbands during the baseball season and serve them during the rest of the year. That is not the fault of Director Brian Hill but the production failed to give us some borrowed nostalgia for the good old days. But Joe Boyd/Joe Hardy misses his wife Meg and and is prepared to throw everything away and go back to his beloved.

But the devilish  Mr. Applegate sends his assistant Lola to seduce him. Rampersad’s Lola  does try but, to our relief and approval, she fails. In case you are wondering, Joe does not forfeit his soul to the devil because his contract has a way out for him. We can assume that he had a good lawyer.

Mike Nadajewski in the juicy role of the devil Applegate deserves special mention. He is superb especially as an audience manipulator. He sings “Those were the good old days” beautifully. A pause, a look, a gesture on his part and the audience reacted with enthusiastic laughter. What a performance.

Cory Sincennes’ sets were excellent with posters and pictures of the 1950’s that some may recall but most of us have seen at one time or another.

In the end what is missing from this production of Damn Yankees is a convincing dose of nostalgia for the largely imaginary past of love of baseball, miraculous change of fortunes, charming people and the triumph of middle-class morality over evil. There was some, but not enough.

Damn Yankees by Richard Adler and Jerry Ross (words and music), George Abbott and Douglas Wallop (book) continues in repertory until October 9, 2022, at the Festival Theatre as part of the Shaw Festival, Niagara-on-the-Lake, Ontario. www.shawfest.com.

James Karas is the Senior Editor - Culture of The Greek Press of Toronto. This review appears in the newspaper.