Alice Childress (1916-1994) wrote thirteen plays and is credited with some “firsts” by an African-American playwright in American theatre, but productions of her works are relatively scarce. The Shae Festival has stepped into the breach by producing one of her best-know plays. Trouble in Mind, at the small Studio Theatre. Social distancing is observed  resulting in many if not most seats in the theatre being unoccupied. No matter because it’s a damn sight better than nothing.

Trouble in Mind  premiered in 1955 in an Off-Broadway production in New York and you can count the number of subsequent productions on your fingers. It did not make it to Broadway and the present production may well be its first in Canada.

Trouble in Mind is a play within a play. Its characters are gathered in a theatre in New York to rehearse a play called  Chaos in Belleville. Trouble  has a cast of four black and two white actors while the director and his assistant as well as the doorman are white. Chaos is is a fictitious play and is supposed to be about anti-lynching. 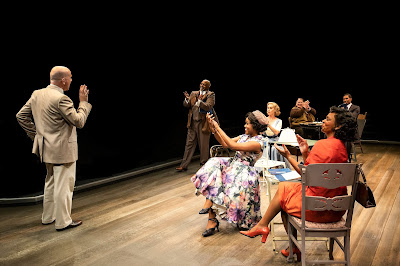 The cast of Troble in Mind. Photo: Lauren Garbutt.

Racism is the central issue of the play and Childress addresses it fearlessly. Nafessa Monroe plays Wiletta Mayer in a powerful performance as a middle-aged actor who is cast to play the mother in Chaos. Wiletta meets John (Kaleb Alexander) a young black actor, new to the theatre, who dreams of going to the top. She gives him some tips about the theatre which is show business and how to deal with management which, of course is white. She advises him not to admit he has taken acting classes, lie about having experience, do not suggest that he is eager for the job and laugh at their jokes no matter how unfunny they may be. In other words, this is how you deal with whites who know they are superior to you and no doubt consider you inferior.

The other black actors are Millie (Kiera Sangster) and Sheldon (David Alan Anderson). Sheldon is an old man and he needs to cover the necessities of life. He has lived with racism for a long time. Millie is a brash and attractive young woman wearing a fur coat and exuding confidence and a devil-may-care attitude. One suspects it is a veneer that she puts up as a protective shield against the reality that she inhabits. Sangster is excellent.

Judy (Kristi Frank) is an attractive, wide-eyed, Yale-educated blonde who thinks people are all the same. She wants to invite the cast to her parents’ house. Wiletta knows the world much better and asks Judy to ask her parents first. That alone says volumes about American racism and ignorance of its existence by some people. Kudos to Frank.

The most rabid racist is Renard, a character in Chaos, who delivers a masterful defence of racism for the delusional Americans who think racism and segregation are examples of moderation. He quotes Emerson, Henry Clay, Longfellow, Dickens and Hitler. Racism in support of segregation backed up by great men.

In Trouble he is one of the actors who keeps to himself except for the fact that he does not want to go for lunch with the cast lest someone sees him! Superb work by Galligan.

After Wiletta, the most interesting character is the director, Al Manners (an outstanding Graeme Somerville). He is intense, full of himself and directing his first Broadway show. In his opinion, he is not a racist and wants to direct an inspired  production of a play that includes a mother giving up her son to a lynch mob. The details about this are sparse but the message is clear. Manners is dealing with four black actors who have lived with racism all their lives but he, like all good racists, is not interested in listening to them. The play reaches its climax when Wiletta pressures Manners to respond to her question whether he would give up his son to a lynch mob. He tells her that he and his son cannot be compared to a black parent and her son. In other words, things like that do not happen to white folks.

The play is done in a theatre-in-the-round set with a few props in the playing area designed by Rachel Forbes. Director Philip Akin does outstanding work in putting the whole thing together with a firm and knowing hand. We get a moving, sometimes funny and always superb performance of a play that we have waited too long to see.