OFF THE GRID - REVIEW OF PRODUCTION IN VICTORIA-BY-THE-SEA

It is a fishing village that was founded in 1819. It had its days of glory which were diminished when the Trans Canada Highway bypassed it. The village is not doing badly by any stretch of the imagination. Its population in 2011 was 102 but by 2016 it had shrunk by 28% to 74. According to a resident, it has sprung back to over 100.

The village has many amenities that much bigger towns would envy including the Victoria Playhouse, which was established forty years ago, that, according to its president, has provided “riveting drama, uproarious comedy, an excellent concert series, children’s theatre lessons, a community cornerstone, countless memories and so much more.” In a village of 100 people! 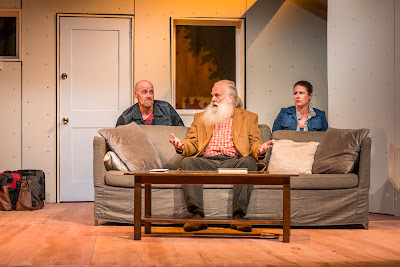 Photo: Heather Ogg
The Victoria Playhouse is a beautiful small theatre that can seat 150 people but had only 48 spectators when I attended because of Covid-19 distancing rules.

Playwright John Spurway, a native of New Brunswick, has had several of his plays produced but none in Atlantic Canada until the Victoria Playhouse picked up his Off the Grid. It is a good choice for a summer festival. It needs three actors and a simple, single set. For the plot, we have Marty (Melissa Kramer) and her husband Leonard (Dennis Trainor) who go to a remote cabin in the woods that has no internet, no television or any of the amenities that we associate with life in the city. But the cabin does have some special features.

Marty is an architect and Leonard a bank loans officer and they do have some issues between them. They want a child however Leonard is reluctant to take the requisite steps, but Marty is pursuing it methodically. She is also writing an article about the isolated but ultra-modern cabin which has a special indoor outhouse.

One of the couple’s issues, we are told by Leonard, is that she speaks 20,000 words per day to his 7,000. What’s more, he has a secret that he is afraid to reveal to his wife and is unsure about his future. They have a neighbour, Lowell (Lee J. Campbell) who looks like a hermit and lives in a ramshackle cabin nearby. (Marty and Leonard’s cabin is not that isolated after all) Lowell has a deep secret as well and all of their issues will be unraveled in an entertaining way.

There is good verbal humour. Lowell describes a situation when an electric tool loses its power. It stops vibrating and the woman decides to finish the job herself and the man says when that happens one has to take things in hand. Well, you did not guess it until he tells us that he is talking about an electric toothbrush. The series of double entendre are hilarious.

Kramer and Trainor play the attractive couple with their strong sexual urges that, unfortunately, are not synchronized and other misunderstandings. Campbell’s Lowell looks like an old hermit but turns out to be a far more interesting man. Mark Fraser directs the play and sets a brisk pace as the complications ebb and flow. It is a thriller and I will not spoil the ending for you.

The play is perfect summer stock, simple, funny, at times, perhaps contrived but a pleasant way to spend an evening in a special venue like Victoria-by-the-Sea.

Off the Grid by John Spurway continues until September 5, 2021, at the Victoria Playhouse, Victoria-by-the-Sea, Prince Edward Island. Visit the company’s website: www.Victoriaplayhouse.com/