BLINDNESS – REVIEW OF UNBELIEVABLE THEATRE AT PRINCESS OF WALES

Blindness is a work for the theatre based on a novel. No amount of describing it can give an adequate depiction of actually experiencing the production. I will shortcut my review by advising you to get your ticket as fast as possible. Go to www.mirvish.com/ and start booking. It is theatre like you never saw before and never imagined. I will give you some details without any pretence to doing the production justice.

Let me take you through some of the steps you will take to get in the theatre that may give an idea of what Blindness is about. If you manage to get one of the 50 tickets that are available for each performance, you will be assigned a spot in the lobby of The Princess of Wales Theatre corresponding to your seat number. You will be given instructions about social distancing, Covid-19 protocols and more importantly what you can do during the show if you need to get out or, by implication, get a panic attack. 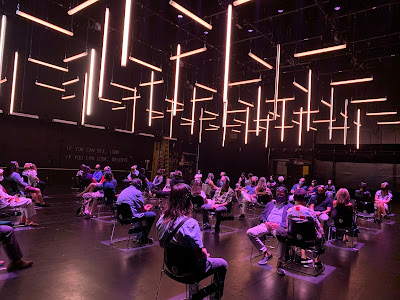 You will then be led on the stage of The Princess of Wales Theatre and shown to your seat which is pandemic-protocol situated in rows where not everyone is facing in the same direction. The walls are all black but there are lights above and under the seats. There is a set of headphones, a flashlight beside you for emergency purposes and instructions about conduct. These are just the preliminaries and the performance which lasts about 75 minutes has not begun yet.

The production begins and you hear the marvellous voice of Juliet Stevenson through your earphones telling a dramatic story about a man suddenly and inexplicably going blind in his car on a busy street in an unnamed city. He is driven to his home by a kind stranger who then steals his car. He is taken to the office of his ophthalmologist and information starts trickling in that many other people are going blind as well. The ophthalmologist goes home and he too becomes blind. His wife does not.

There is a major and catastrophic epidemic of blindness and people are starving, killing each other and dogs are seen eating the flesh of a recently deceased person. It is a horrific situation that inspires terror, hunger, inhumanity and the need for communal cohesion. Epidemics have been around since time immemorial and there are heart-wrenching descriptions of their effects on people. I think of reading descriptions of the Black Death of the mid-fourteenth century or Daniel Defoe’s A Year of the Plague Journal that are unbearable. What you get in Blindness is more immediate and far more terrifying.

Blindness has an additional and crucial difference. All the people are are moved by the government to a hospital for their protection and safety. They are in fact moved to a large warehouse, a former mental asylum where they are prisoners. The play is as much about totalitarian government as it is about an epidemic. 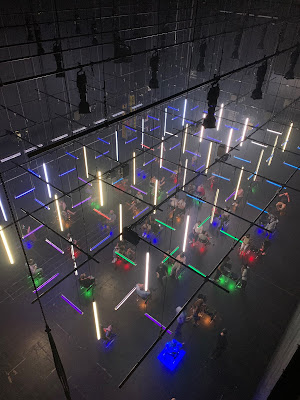 There are no actors in Blindness except for the voice of Juliet Stevenson speaking in your headphone. When she speaks or whispers to her husband and to other victims it is as if she is speaking or whispering to you. Not the other 49 people on the stage, just you. She whispers that she is looking for a lighter and you hear her in your left ear. She then flicks the lighter near your right ear. You hear her footsteps as she come near you from behind and hear and almost feel her breath as she speaks. You instinctively turn around – it is completely dark in the theatre – to see her. Do you remember the scene of the Cowardly Lion facing the Wizard of Oz? He was startled when he thought someone pulled his tail. He was so scared he pulled it himself. I had a Cowardly Lion moment. I was holding onto the headphones cable and when I turned to see who was speaking in my ear, I pulled the cord and thought I had bumped into the speaker. There was no one there, of course, but the illusion persisted throughout that you were with the ophthalmologist’s wife and the blind people experiencing the nightmare of the epidemic.

The sound system is so brilliant, you hear the whispers and intimate talk as if someone is an inch away from you as well as the loud noises further off and everything that is happening in the hospital, the basement of the supermarket or outside on the street. It is a frightful experience.

The lights flash on and off. The fluorescent fixtures are lowered to eyelevel. But much of the time we are like the people we hear about, in complete darkness.

Blindness is subtitled “A Socially Distanced Sound Installation” and is based on the novel by José Saramago, which was published in 1995, well before the current pandemic. The novel provides the basic story but it is the genius Simon Stephens who adapted the novel for the stage, Walter Meierjohann who directed the production for the Donmar theatre in London, Ben and Rex Ringham who designed the sound system, Lizzie Clachan who designed the production and Jessica Hung Han Yun who designed the lighting. I feel I am doing them a gross injustice by simply listing their names but the result is a theatrical masterpiece.

I go back to the beginning. Get your tickets and see theatre like you have never seen before.

Blindness by Simon Stephens based on the novel by José Saramago continues until August 29, 2021 at the Princess of Wales Theatre, 300 King St. West, , . www.mirvish.com/
Posted by James Karas at 12:27 PM