Edward Albee’s Three Tall Women is an intriguing, stimulating and brilliant play that receives a production befitting the latter description by the Stratford Festival, in the small Studio Theatre. The pandemic reduced the number of spectators but it did nothing to affect the extraordinary quality of the production.

Diana Leblanc directed the outstanding Martha Henry, Lucy Peacock and Mamie Zwettler in a production that brought out the humour, tragedy and impact of Albee’s 1991 Pulitzer Prize winner that is partly autobiographical and riveting theatre. The play was done in two parts. Act I was performed at 3:00 in the afternoon and an Act II at 7:00 in the evening.

The three tall women of the first act are named A, B and C for reasons that are hinted on in the first act and become more explicit in the second half. A (Martha Henry) is a 90+ year old wealthy woman who is taken care of by B (Lucy Peacock) and is visited by C (Mamie Zwettler), a young woman from a lawyer’s office. 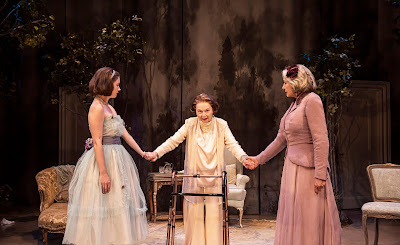 A is the centre of attention. The following are some of the traits of the wealthy, old woman: selfish, arrogant, bigoted, threatening, crotchety, vengeful, paranoid, confused, forgetful, unpleasant. A rich bitch. She needs a walker to get around and B and C don’t kowtow to her all the time.

B at 52 is a caregiver who can be sarcastic or put up with the old bitch without hiding her displeasure at times. C at 26 is pretty, ambitious and tries to get some paperwork signed by A without much luck. Like B she does not always hide her displeasure.

In the second act, A is up and about and the three women discuss life in the wealthy class including courtship, love, marriage, hope, optimism, dreams, infidelity, horseback riding, children and all the miseries that life can bring.

Albee gives us hints in the first act about who these women are. C is 26, B is twice that at 52. They do not have names except for the letters of the alphabet. In the second act, it becomes clearer especially in C’s recollection of the first time she made love and A and B have the same memory. We realize that the three tall women are in fact one woman at three stages in her life.

The production is superb. Martha Henry gives a supreme performance as A using her immense talent to display all the characteristics of the old woman described above; Lucy Peacock, using the twang in her voice that she can employ when she wants to, is simply outstanding as the woman in middle age who is beyond youthful optimism and will soon face what she sees in the future. Mamie Zwettler as C is a good girl, she tells us, and she will never become like the two other women. She will find a way to avoid all the miseries that she sees and hears described by herself at different stages of her life. Beautifully done.

The play has a fourth character called The Boy, a silent part played by Andrew Iles. He is usually seen as Albee himself confronting his mother and his hideous relationship with her.

The production is designed by Francesca Callow. The set is a room in the house of a wealthy person with several chairs and some furniture. That is all that is required. In the second act, Albee’s stage directions call for A to remain lying on a bed with a mask on. We only see a mask because A will appear live. In this production, we see A on a platform above the acting area, lying in bed.  It works.

To go back to the beginning, the play Three Tall Woman and this production under the expert direction of Diana Leblanc, is theatre at its best. Something we should see on a regular basis.