The Stratford Festival has been facing the grim reality of the pandemic and has had to erect  large canopies, including one next the the sparking new Tom Pattern Theatre, to produce a few shows to keep the Festival going and keep our memories of the good old days alive.

Tomson Highway’s  The Rez Sisters is an inspired choice for many reasons but the great quality of the play is sufficient justification on its own. The play premiered in 1986 at the Native Canadian Centre of Toronto and won the Dora Mavor Moore Award as the Best New Play. It takes place on a reservation, hence the Rez, the short form for it in the title. The Sisters are seven women who one way or another can claim the relationship suggested by that word.

Through the seven sisters, Highway gives a portrait of life on The Wasaychigan Hill Indian Reserve on Manitoulin Island, Ontario. The author tells us that Wasaychigan means window in Ojibway and the play is indeed an opening to the lives of a cross section of women who live there. 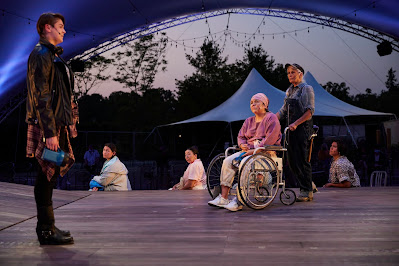 They are all indigenous, of course, and they have some common characteristics as well as individual traits. The most common characteristic is the desire to get out of poverty, acquire some “things” and fulfill some dreams and most importantly win at bingo. The pot of gold for these woman lies in The Biggest Bingo Game and the end of the rainbow is in Toronto.

Pelajia’s first words are “I wanna go to Toronto.” The reservation, with its poverty and social problems such as violence and rape, is also a dream factory. The dreams vary from getting a stove, to buying an island or a record player to winning The Biggest Bingo Game.

Director Jessica Carmichael, like Highway, does not want to minimize the problems of the women but she wants us to see their positive side as well. The energy, the boisterousness, and the sense of community are all there. Carmichael puts the production in overdrive and rarely gears down.

There are several factors that militate against the complete success of the production. The canopy does not help with the acoustics. All the actors are miked for fear that we may not hear them even in the small space under the canopy. The problem is that all the dialogue comes from the loudspeakers and many times the only way you can recognize who is speaking is by looking for moving lips. At times things became confusing.

The Rez Sisters is also a funny play but the mode of the performance drowned out almost all the laughter. That is an unfortunate reduction in enjoying a play that combines humour and drama. 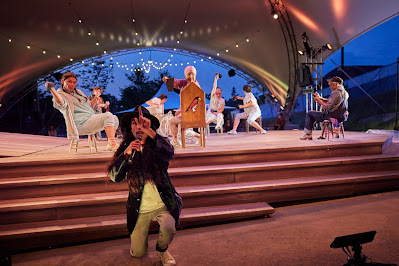 The talented cast no doubt followed instructions and had to settle for the unenviable venue. They deserve kudos for their performance. I list them alphabetically; Brefny Caribou plays the pathetic and mentally challenged Zhaboonigan. Lisa Cromarty plays Marie-Adele Starblanket, a woman with 14 children, suffering from cancer. Irene Poole plays Veronique, a woman married to a drunkard and ridiculed by the others for not having children of her own. However, she had the decency to adopt Zhaboonigan after her parents were killed in a car crash. She wants a stove to feed all the children.

Zach Running Coyote plays Nanabush, a dancer, who is in turn a Seagull, a Nighthawk and the Bingo Master. Nanabush is the one who takes Marie-Adele’s soul into the spirit world.

Obviously, the production of The Rez Sisters under a canopy was unplanned and we should be grateful. We are and hope that next year we can see it in a beautiful theatre.

The Raz Sisters by Tomson Highway played until Augusts 21, 2021 under the canopy next to the Tom Patterson Theatre, Stratford, Ontario. www.stratfordfestival.ca