As the whole world knows, once upon a time Alice and her sister were sitting on  the bank of a river and she was bored. She peeped at the book that her sister was reading and noticed that it had no pictures or conversations. That will not do. But wait – there is a white rabbit with pink eyes that just ran by!

The Guild Theatre Festival has undertaken to act out for us some of Alice’s adventures as she follows the rabbit into a rabbit-hole and her wonderfully memorable experiences begin.

David Savoy has adopted a few of Alice’s adventures into a taut and fast-paced play that can be performed with the minimum of props and the maximum of kinetic energy directed by Tyler J. Seguin.

The production needs only six actors – two men and four women. I am tempted to say boys and girls because they display such agility, drive, speed and coordination that they may well power a Tesla for a long distance. 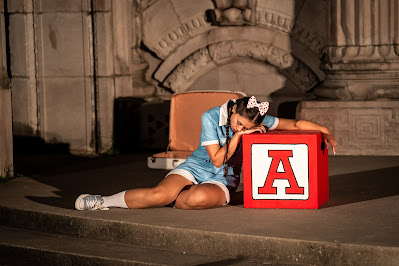 I need to tell you who they are and what they do, alphabetically, please. Cayne Kitagawa plays the White Rabbit, Footman 1, White Knight and Tweedle Dee. Anna-Marie Krystiuk takes on the Eagle, Cheshire Cat March Hare, Tweedle Dum and Card 7.  Muhaddisah is responsible for Dormouse, Cook, Rose and Card 2. Michael Williamson represents the Parrot, Footman 2, Mad Hatter, Daisy, Mock Turtle and Card 5. Lauren Wolanski is the Queen of Hearts, Caterpillar, Duchess, Tiger Lily, Sister and Dodo.  Kiana Woo is the super-charged, Energizer-bunny-you-are-a-turtle-compared-to-me Alice. If you want to know how many roles are played on stage, do your own arithmetic.

A production that emphasizes speed, clarity and humour with a minimum of props needs imaginative staging. Alice needs to go down, down, down the rabbit hole. You achieve that by having Alice stand over a few hoops and have them lifted over her head as she descends into wonderland.

We need a Queen of Hearts dressed in a regal gown. Cast members unfold a large, colourful tarp. They shake it open and the Queen mounts a stand and they drape the imperial attire around her.

The sped and energy with which the actors perform is accompanied with clear enunciation and wonderful vocal variations. We want the actors to do justice to the representation of the various characters and they do.

The production is designed by Nancy Ann Perrin to be played on the open and limited space of The Greek Theatre in the Guild Park & Gardens, Scarborough. The program lists seven people responsible for Paint and Props and they do provide a colourful spectacle as you would expect in Wonderland.

A thoroughly enjoyable ninety minutes and a visit with a group of familiar characters.

Alice in Wonderland adapted by David Savoy from the story by Lewis Carroll will run until August 29, 2021, at The Greek Theatre, Guild Park & Gardens, 201 Guildwood Parkway, Scarborough, Ontario.  www.guildfestivaltheatre.ca/