The Guild Theatre Festival is in its 10th season with a production of David French’s Salt-Water Moon in the Greek Theatre in the Guild Park and Gardens in Scarborough. The two-hander is an excellent choice and the Guild Festival provides an entertaining evening in the beautiful setting of the park.

Salt-Water Moon is a marvelous play about Jacob, a young man of seventeen returning to Newfoundland to woo his girlfriend Mary, a year after he left her to go to Toronto. The play is richly poetic and full of humour, tenderness and drama. Mary is understandably angry, hurt and resentful for being abandoned by Jacob. In his absence she became engaged to a rich young man if only to get out of her poverty.

The play is set in Coley’s Point, Newfoundland in August 1926, ten years after the Battle of the Somme in which hundreds of Newfoundlanders were slaughtered. Mary’s father was killed while Jacob’s father survived but both families ended up in dire poverty and victims of abuse by the well-off people of the town. 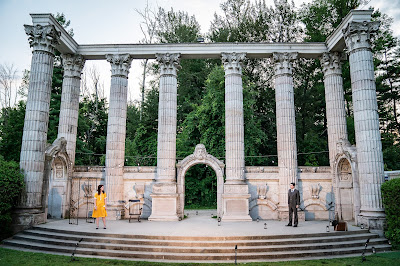 Jacob and Mary have to work out the personal pain and anger as well as the social conditions that they are living in before they can let love triumph over all those obstacles.

The Guild Theatre stages the play in the Greek Theatre which consists of eight Greek columns in a park with a few dozen plastic chairs in the grass for the audience. On a warm summer evening it is a beautiful setting and requires no sets at all except for a rocking chair.

Alex Furber as Jacob and Sarah Gibbons as Mary have a lot of ground to cover in 90 minutes as they go through many stages of courtship, conflicting emotions, visits to the past, and looks at the present. Furber and Gibbons do fine work and they take us through  the emotional variations and narration of past events. 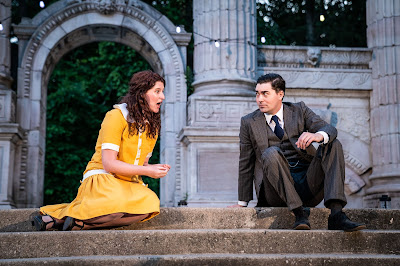 Furber as Jacob must display a lot of ardor, show bravado, belittle Mary’s fiancé, be entertaining and cajoling, and go through a gamut of methods to appease and convince Mary that he still loves her. Gibbons as Mary has not only to work out her anger and hurt but to consider her social position and her sister’s condition before choosing to dump her wealthy fiancé.

Both Furber and Gibbons have to bring out French’s poetry and they do a good job in delivering  the musicality of the Newfoundland accent and the resonance of the prose.

Director Helen Juvonen does a fine job in keeping the pace of the play and being attentive to the pauses and the necessary modulations.

Salt-Water Moon premiered at the Tarragon Theatre in 1984 in the halcyon days of Bill Glassco and Canadian theatre. Coley’s Point, Newfoundland, where it is set also happens to be David French’s birthplace. It was a pleasure to see it again.

James Karas is the Senior Editor of The Greek Press, Toronto