Outside Mullingar is a funny, moving and intriguing play by John Patrick Shanley that receives a wonderful production by Theatre Baddeck in the village of Baddeck on Cape Breton Island. The author and the play may be familiar to many people but I suspect that the village and the theatre company do not claim the same renown. Perhaps I should admit my total ignorance of them and not presume to speak for others.

The play has four characters, the elderly Tony Reilly (Vince Carlin) and his son Anthony (Michael Peng), and Aoife Muldoon (Kathleen Sheehy) and her daughter Rosemary (Christy MacRae-Ziss). They live on adjoining cattle and sheep farms in Ireland and we meet them in December 2008, the year of the Beijing Olympics where Ireland won three medals in boxing competitions, i.e., the Irish are tough fighters. It is just after the funeral of Chris Muldoon, Aoife’s husband.

The play has  a simple but beguiling plot with many tangents involving the conflict between the father and the son, the love of the land, concern about continuity after death, and most of all the relationship or lack thereof between Anthony and Rosemary. 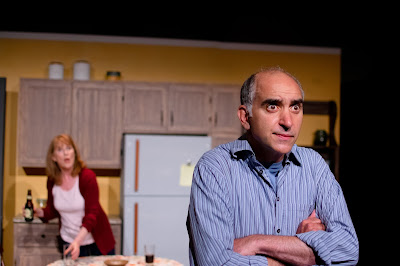 Tony has a rocky relationship with his son who, he thinks, does not love the land or farming and is not worthy of inheriting the farm. He is thinking of giving the farm to his nephew who lives in America. Anthony at 42 has problems with his father and is incapable of having a relationship with a woman. Is he gay? Is he a virgin? What is his problem? I will not reveal it because trying to figure Anthony out is one of the play’s fascinations.

Rosemary is 35 years of age, attractive, perhaps vengeful, mysterious and probably  interested in Anthony. Their relationship dominates the play with its humour, humanity and indeed beauty. She is the strongest and most complex character in the play.

There is a scene in the play where Rosemary and Anthony confront each other. Director Douglas Beattie has them stand a few feet from each other as if their feet are nailed to the floor. The physical distance and immobility between them are emblematic of the emotional and psychological chasm that separates them. They do not move because they are locked in their own prisons and cannot reach out to each other. In the final scene, Rosemary manages to break free from her shackles and goes on the attack. She uses sound arguments and, in the end, her sexual attraction to get Anthony to notice her and break out of his own shell. A superb performance by MacRae-Ziss.

Kudos to the cast for their acting especially for delivering their lines with the musicality of the Irish accents. Carlin’s Tony is a crotchety old man who cannot get along with his son and has feelings of guilt about his wife. He sold the right of way to his farm to Muldoon who in turn gave it to Rosemary. It plays an important emotional and legal issue in the play. In the end Tony’s humanity coms forth and he reconciles with his son. A fine performance by Carlin.

Sheehy is very effective as the old Aoife who shows affection, strength and  worry as she approaches the end of her life. She delivers an Aoife as a tough old woman whose husband has just died and who knows that she will soon join him.

Peng as Anthony manages to look confused, painfully shy and a man with an embarrassing secret that dominates his life and lack of relationships with women. Can Rosemary take care of that?

Director Beattie does masterly work with the professional cast, paying attention to details and bringing forth a fine production.

Theatre Baddeck has been around since 2015 but it has been locked down for two years. It thrives in a village of 800 people and stages its shows in a large room in the Baddeck Masonic Temple. There are fewer than 100 seats in the theatre and about 30 people are allowed in due to the pandemic. Two more productions are scheduled for this year. How’s that for a village of 800 people?