Dear Evan Hansen is a grand musical that has finally arrived in Toronto to fulfill musical lovers’ great expectations. It tells a story about teenage angst, growing up and the pain of high school students of dysfunctional families.

Evan Hansen (Robert Markus), the central character is a seventeen-year old high school student from a broken family. He is a misfit with emotional issues and is variously described as a geek, a nerd and a loser. Above all, Evan is an accomplished liar not so much out of inborn mendacity as an awkward survival tool, an emotional crutch. He is in therapy trying to establish human contact and he is writing letters to himself (hence the title) about having a good day when he is having anything but.

The cast of DEAR EVAN HANSEN – Canadian Company. Photo by Matthew Murphy, 2019.
Connor (San Patrick Dolan) is another student, drug-taking bully and a psychopath who has no friends. He finds one of Evan’s letters which suggests that he and Evan are good friends. When he takes his own life, his parents find the letter and are convinced that their psychotic son actually had a friend.

The letter and the subsequent lies create an entire legend about the friendship and the love between the two boys and especially their love of an apple orchard. The lie is buttressed by Jared (Alessandro Costantini), a clownish student who is a “family” friend of Evan. The creepy Connor becomes posthumously not only famous but heroic. Alana (Shakura Dickson) is a talkative and high-strung student who finds a mission in establishing the Connor Foundation again built on lies. All these teenagers are broken and most people can relate to high school anxieties or parental fears and worries.

Connor’s parents are Larry (Evan Buliung) and Cynthia (Claire Rankin), well off but unable to make contact with Connor or their daughter Zoe (Stephanie La Rochelle) or each other. Evan’s mother Heidi (Jessica Sherman) is a highly sympathetic person, a single mother struggling to meet financial needs by working hard and trying to help her troubled son.

The finely wrought book by Steven Levenson takes us from the painful awkwardness and anxieties of not only Evan but also Alana, Zoe and even Jared, who despite his braggadocio and acidic sense of humour, shows signs of anxious relations with his parents to whom he lies as a matter of course.

The uneasy relationship of Connor’s parents descends into excruciating pain as they grieve for their son’s death and latch onto Evan’s lies to find something positive in their son’s life and suicide. 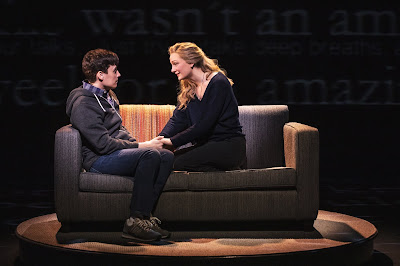 Robert Markus and Jessica Sherman in DEAR EVAN HANSEN – Canadian Company.
Photo by Matthew Murphy, 2019.
Heidi struggles to maintain her pride and dignity amidst poverty and to take care of her son in the time left to her by long hours of work. Sherman sings So Big/So Small near the end, recalling the day her husband left her alone to raise her child. She sings of the pain of separation, of the (unwarranted) guilt of being unable to fulfill all of Evan’s needs but most of all expressing the undiminished splendour of maternal love and devotion.

The performances of the cast take you in as they all appear to be the characters they represent rather than acting. That is as high a commendation as one can give actors.
The set by David Korins consists of a largely empty stage with numerous projections on a black background. With the projections of Peter Nigrini, the set allows for fluidity and quick and seamless scene changes with some pieces of furniture being rolled on and off the stage as necessary. All is expertly handled by director Michael Greif.

The music and songs provide for some memorable highlights and some forgettable segments that serve their purpose.

And speaking of fulfilment of audience expectations, opening night provided the perfect example of infectious enthusiasm where the spectators were geared up and expressed their approval at every note. Standing ovation? You Bet.
____________
Dear Evan Hansen by Steven Levenson (book) and Benj Pasek and Justin Paul (music and lyrics) continues until June 30, 2019 at the Royal Alexandra Theatre, 260 King St. W. Toronto, Ont. www.mirvish.com