Prison life and its effects on people has been a popular subject on stage and far more so on television and in movies. Alcatraz, Leavenworth, San Quentin, Riker’s Island and others have given us images of life in penitentiaries that are unforgettable even if not entirely accurate.

Charlotte Corbeil-Coleman in Guarded Girls, now playing at the Tarragon Theatre, presents us with a horrific picture of life in a prison for women. In the opening scene we meet two inmates, Sid (Vivien Endicott-Douglas) and Brit (Virgilia Griffith) and the prison Guard (Columpa C Bobb).

The prisoners attempt to make contact but the only way they can reach each other is through play-acting. They pretend to be each other or the prison guard. The Guard is arrogant, imperious and almost subhuman. Throughout much of the play she delivers white buckets on the stage and arranges them around the playing area. The inmates are both afraid and contemptuous of the Guard. When Sid changes her sweater the Guard barks at her “Your breasts offend me.”

Virgilia Griffith, Vivien Endicott-Douglas, Columpa Bobb and Michaela Washburn
in Guarded Girls. Photo by Cylla von Tiedemann
Life in prison has had the effect of dehumanizing the women, especially Sid, while Brit still tries to maintain human contact as she waits to be paroled. Sid simply hates people and has violent emotional explosions that add to her sentence.

In the second segment of the play we meet Kit (Michaela Washburn) taking a shower in the nude. She babbles as she soaps herself and she is clearly nuts. The scene lasts longer than necessary because after we realize that she is loony much of what she says goes by the board. Two nasty-looking Officers (played by Endicott-Douglas and Griffith) wearing visored helmets come to grab her out of the shower but they are unsuccessful because she is too slippery. Really?

The play changes gears in the final segment where we meet three young Girls played by the same actors as the prisoners. They are the children of Sid, Brit and Kit (I think) who relate stories about broken families, violence and brutality. The Girls could be the adult inmates in their youth but Corbeil-Coleman packs so much information in the 90-minute play, that the plotline becomes a bit blurry.

The brutal Guard who continues to walk on stage carrying pails is overpowered and held hostage by Kit. The Guard’s story comes out but I had difficulty accepting the suggestion that she goes to pieces over her ordeal. There is nothing to prepare us for her sudden change unless her aversion to Sid’s breasts is a clue. 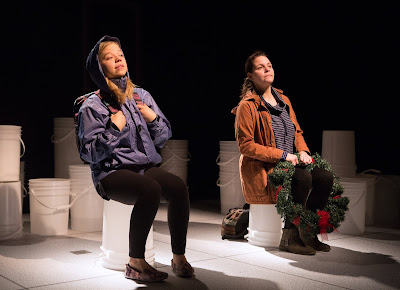 Vivien Endicott-Douglas and Michaela Washburn in Guarded Girls.
Photo by Cylla von Tiedemann
There are numerous stories of murder and various crimes crammed in the plot. The play, however, could use a dramaturge to streamline the plot and make it more comprehensible.

The most commendable part of the production are the brilliant performances by the four actors. The three inmates display superb emotional ranges as adults. Then they become children and show true talent again in their ability to represent teenagers in crises. Kudos to director Richard Roee for guiding them through amazing performances.

The set by Joanna Yu is a bare stage with lighting changes by designer Andre du Toit. The sole prop used is a large number of pails arranged on stage by the Guard. The characters sit on the pails and hide contraband in them but I did not figure out the necessity of so many of them unless it was simply an excuse for the Guard to walk on and off the stage frequently.
___________

Guarded Girls by Charlotte Corbeil-Coleman, in a production by Tarragon Theatre in association with Green Light Arts, opened on April 3 and will run until May 5, 2019 at the Tarragon Theatre, 30 Bridgman Ave. Toronto, Ontario.  www.tarragontheatre.com