THE GLASS MENAGERIE – REVIEW OF A NOISE WITHIN THEATRE PRODUCTION

Tennessee Williams’ The Glass Menagerie is a major milepost on the road of American
drama and it is no small pleasure to see a production that is superbly acted and meticulously
directed. That is what A Noise Within Theatre offers in Pasadena, California.

Director Geoff Elliott concentrates on the memories of the characters, their dreams, their illusions and delusions and the crushing and liberating effect of reality.

The lights go on, on an almost empty stage and Tom (Rafael Goldstein) tells us that The Glass Menagerie is a memory play and he introduces the characters, including his father who abandoned the family many years ago. We see the photograph of a smiling man on the back wall and he dominates the play without ever appearing. It is Tom’s father. 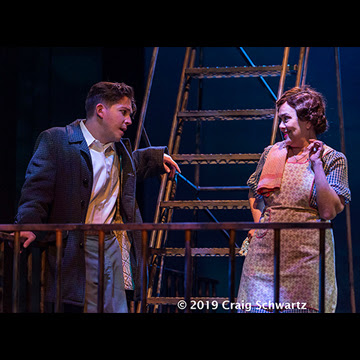 Tom snaps his fingers and furniture is brought on the stage to begin the action and tell us what he recalls from many years ago. He recalls his mother Amanda (Deborah Strang), a woman who pretends to remember a life of wealth and leisure when as many as 17 gentlemen callers came for her on one day alone. She was beautiful, genteel and sophisticated, and could have married well but she went for a man who worked for the telephone company. He fell in love with distance, she tells us, and put distance between himself and his family with no return address.

Deborah Strang gives an outstanding performance as Amanda, a woman who believes the myths of her past glories amid the reality of her life where she is pathetic and ridiculous. Everything Amanda does is pitiable and transparently pretentious but it keeps reality at a distance with no small effort. Strang makes a marvelous Amanda.

Erika Soto plays the tragic, pitiful and wretched Laura. She is excruciatingly shy as she limps and makes some delicate glass figurines her world. Soto captures Laura’s character fully and her fears, awkwardness, high school memories come out in a perfect pitch. 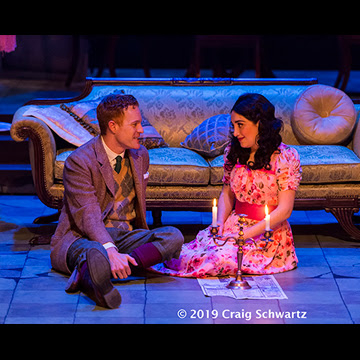 Kasey Mahaffey and Erika Soto. Photo: Craig Schwartz
Kasey Mahaffy plays Jim O’Connor, the gentleman caller superbly. We see his bravado as he waives his arms just a bit excessively and tries to capture some of his image of success that he had while in high school. As with the other characters, Elliott directs Mahaffy with precision so that we see his humanity, his pitiful post-high school failure and his dream of making it. Marvelously done.

Tom is, as the narrator, and the man that gives focus to the play, is our guide to his situation and to the personality of the other people in the play. He is there and not there during his recollection of past events. He becomes almost a phantom in his own story. He sees reality as he escapes it by going to the movies every night. He hides in a cubicle at work to write poetry and dreams of following his father by leaving his family behind. He drinks and is almost as pathetic as his mother and sister in his escape in the artificial world of Hollywood. But he also realizes its artificiality and unreality and takes steps towards joining the merchant marine and going to the South Seas. Is that not just illusory?

Elliot does superb work in his presentation of Tom and delivers an outstanding production of a great play.
__________
The Glass Menagerie by Tennessee Williams runs until April 26, 2019 at A Noise Within Theatre, 3352 E. Foothill Blvd. Pasadena, California www.anoisewithin.org/