HAND TO GOD - REVIEW OF COAL MINE THEATRE PRODUCTION

Hand to God is a raunchy, exuberant, satanic, irreverent, hilarious and serious play now playing at Coal Mine Theatre. If you believe that good things come in small theatres, Coal Mine Theatre raises the bar well above that level.

Robert Askins’ play was first produced Off-Broadway in 2011 and made it to Broadway and London among numerous other venues.

The Southern drawl and the setting of a church basement tell you that you are in the American Bible Belt. It is supposed to be in Texas but I heard no allusion to that effect. The sexually explicit language in a church tells you to brace yourself for some very bawdy proceedings. Holy rollers may wish to give the production a very wide berth. 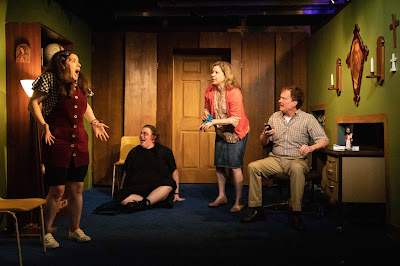 Amy Keating, Francis Melling, Nicole Underhay and Ted Dykstra.  Photo: Kristina Ruddick
Margery (an outstanding Nicole Underhay) is attractive, deeply religious and a recent widow because her husband ate himself to death. Her teenage son Jason (Frank Cox-O’Connell) is shy but also slightly unhinged. The play opens with a puppet sticking its head from the curtain and relating the story of humanity from before society to the formation of social groups and the invention of the devil.

We soon realize that the puppet that Jason holds, Tyrone, is quite real (to him) and is the Devil that controls Jason. This is a marvelous theatrical ploy as Jason’s dual character dominates the play. Cox-O’Connell does the voice of Tyrone and his own with great speed and effectiveness as he controls the movements of the puppet which appears to control his mental and emotional states.

Timothy (Francis Melling) is a foul-mouthed, hideous-looking kid from the neighbourhood whose overactive hormones have no brakes. We also have Jessica (Amy Keating), the girl next door and Pastor Greg (Ted Dykstra) who has sexual ambitions towards Margery.

Remember we are in a church basement and Margery is preparing a religious puppet show for the Pastor and the congregation. And speaking of sexual attraction, make that tension, the carnal currents flowing among the characters would bust normal electrical cables. And I blush to tell you about violent sex, intra-human and intra-puppet. Hint: Jessica also has a puppet and Tyrone likes her/it.

Underhay gives an extraordinary performance as the holy roller who fights off the pastor’s sexual advances but succumbs to Timothy’s brutal idea of coitus with equal force. Margery is driven to hysterics more than once and Underhay handles the role with assurance and ability.
Keating handles the role of Jessica as well as her alter ego, the puppet. Like Cox-O’Connell she must handle quick and convincing voice changes as well as the puppet. 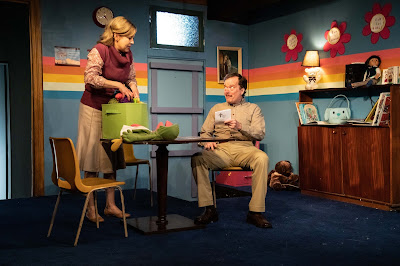 Dykstra as the pastor has more than hormonal issues. He has to attempt to appear rational in an irrational world and must even attempt an exorcism of the Devil from Jason. As usual, Dykstra gives an unfailingly fine performance.

Marcus Jamin handles Puppetry Direction and Design with superb results. Anahita Dehbonehie shows what a set designer with intelligence and imagination can do in a tiny theatre like Coal Mine. The church basement, the swings outside, the production of a car, division of the stage  in separate spaces are all handled with speed and are economical and simply outstanding.

Director Mitchell Cushman does masterly work in his execution of a highly demanding play that requires impeccable timing, emotional roller coasters, violence and a great deal of humour. He does not leave any aspect unattended and his sure hand is visible in every move.
___________
Hand to God by Richard Askins opened on April 24 and will run until May 12, 2019 at the Coal Mine Theatre, 1454 Danforth Ave. Toronto, M4J 1N4. www.coalminetheatre.com

James Karas is the Senior Editor – Culture of The Greek Press. www.greekpress.ca
Posted by James Karas at 12:05 PM