The story of Marie-Joseph Angelique and life in early 18th century Quebec are great sagas that deserve to be told and examined, least of all because they are about Canada. Yes, times are a-changing but we still don’t like to talk about and learn much about our history.

The late Lorena Gale wrote a play, Angelique, in 1998 and Factory and Obsidian Theatre have produced it and it is now playing at Factory Theatre, Toronto. Don’t waste your time reading this or any review – just go see it. 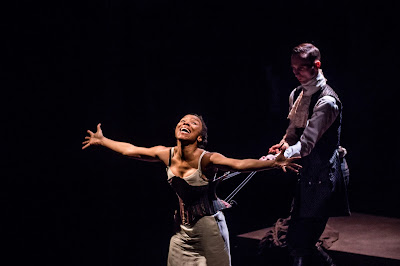 Jenny Brizard and Karl Graboushas. Photo: Andrew Alexander
Angelique (Jenny Brizard) was a black slave, born in 1710, who was purchased by Francois (Karl Graboshas), a successful businessman in Montreal, for his wife Thérèse (France Rolland). Some men buy diamonds or fur coats but Francois bought her an attractive woman. His purchase was not entirely altruistic, you may say, because soon after Francois brings Angelique home, he rapes her.


Rape is an ugly word and you need not imagine violence and threats in the act. He had sex with her because she was his property and she could not possibly refuse. She had a child (more than one during the play) and thanks to extremely high mortality rates at the time, they all died.

Most of our images of slavery come from the American south where brutality was hidden behind a patina of gentility and civilized behaviour. Welcome home to early Quebec where life is good for the successful who are served by slaves and indentured servants and racism is so deeply rooted that they cannot conceive of these people as anything but common property. Flogging them is routine.

Angelique has to put up with Francois and the sexually dried up prune Thérèse as she strikes up relations with underlings Claude (Olivier Lamarche) and César (Omari Newton) and tries to escape from her situation. She is unsuccessful, to put it bluntly. There is a serious fire in Montreal, and she is accused of starting it. After some vignettes of a farcical trial based on laughable hearsay evidence she is convicted and hanged in 1734.

The production is done in two chronological periods, the eighteenth and twentieth centuries. At the beginning, Francois is wearing a modern suit and tie as do the other characters. Then he appears in 18th century attire. Are we to get the message that not much has changed in the past two and a half centuries? Some attitudes may not have changed but much has changed and the two latitudes approach is unconvincing and unnecessary. 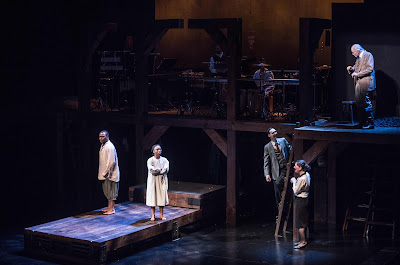 What has not changed or diminished is Angelique’s riveting story. Her search for freedom, her dreams and those of Claude and Cesar of a better life and the frightful society in which she lived.

Francois dies and the fight for corporate control of his share in the business with his best friend and partner Ignace (Chip Chuipka) by Thérèse is realistic and things, it seems, have not changed much since then. Ignace is a polished and civilized gentleman who is ruthless to the bone and racist to the marrow.

Thérèse in the hands of France Rolland shows the racist and brutal attitude of her society towards slaves and servants but does display some spunk in her fight for corporate control with Ignace.

Newton, Lamarche and PJ Prudat as the servant Manon do a fine job in representing the subservient class.

The production features original music by Sixtrum Percussion Ensemble. The players appear above the playing area and play almost throughout the performance. I have no idea what they were supposed to add to a fine play. I found them annoying at best and more often interfering with the performance. On a number of occasions, the percussion beat fell on a spoken syllable, drowning it.

Most of the performance is done on a raised platform that resembles the place of execution. A gibbet is the first thing we see. Effective work by Set Designer Eo Sharp.

The set design assisted greatly in the numerous scene changes in the play and provided the necessary fluidity. Director Mike Payette made good use of it and, aside from the unnecessary and annoying music, he deserves kudos for a fine production of a significant Canadian play.
__________

Angelique by Lorena Gale in a production by Factory and Obsidian Theatre in a Black Theatre Workshop and Tableau D’Hôte Theatre co-production runs until April 21, 2019 at the Factory Theatre, 125 Bathurst Street, Toronto, Ontario. www.factorytheatre.ca/