Wedding at Aulis is a highly effective adaptation by Sina Gilani of Euripides’ Iphigenia in Aulis. The production brings the main characters and the complex moral issues into focus and manages to be faithful to the original spirit of the play if not to the text. No small achievement.

The text of the play is pretty much a muddle in any event but the outline of the myth that Euripides used is pretty clear. In mythical times, there are a thousand ships moored in the windless Bay of Aulis. The armies of the Greek kingdoms are camped on the shore all waiting to sail across the Aegean Sea to Troy to bring back Helen, the beautiful wife of King Menelaus of Sparta.

The soothsayer Calchas tells King Agamemnon that he must sacrifice his daughter Iphigenia before the goddess Artemis will give the Greeks fair winds to transport them to Troy. 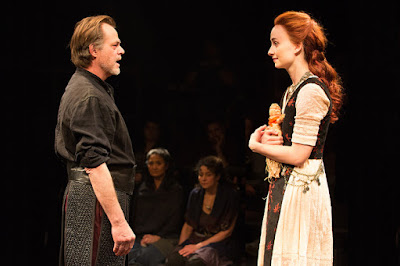 Stuart Hughes and Alice Snaden. Photo: Cylla von Tiedemann.
Agamemnon summons his wife Clytemnestra and Iphigenia to Aulis under the ruse that the hero Achilles will marry his daughter. There are endless possibilities for conflict, emotional turmoil and in the end the shedding of innocent blood but that is the basic outline of the story.

Gilani maintains the outline of the myth but he adds three Fates to the play. They appear at the beginning of the play weaving the destiny of people but bemoaning the loss of a thread and we see them at the end as well. They are played by Alana Bridgewater, Leah Cherniak and Sarah Wilson.

Agamemnon (Stuart Hughes), Menelaus (Frank Cox-O’Connell) and Achilles (Sabastian Heins) are the dominant men of the play. Agamemnon is ambitious and domineering and prepared to lie to his wife, mislead Achilles and sacrifice his daughter. The excuse: he, along with the other suitors for Helen, swore to her father to attack anyone who took Helen away from Menelaus. Hughes is very effective in portraying a man who has ambition without morality and or even compunction about what he is about to do.

Menelaus in the hands of Cox-O’Connell is temperamental, immature, blustering, weak and cowardly. Heins as Achilles is muscular, heroic and all-brawn but no brains or morals. All three are superbly acted. Nancy Palk plays the Old Man, Agamemnon’s servant, and it is a marvelous role as a crotchety and abused person that Palk acts out with relish.
Alice Snaden as Iphigenia is slender, tall, innocent and the hapless victim of fraud leading to death. But she has a transformation and decides that dying for her country is just fine. 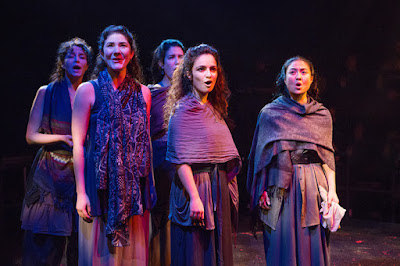 Wedding at Aulis Chorus. Photo: Cylla von Tiedemann.
The most impressive character and portrayal is Raquel Duffy’s Clytemnestra. She displays humanity, motherly love and strength of character as she faces the sacrifice of her daughter. A stellar performance by Duffy.

Gilani and director Alan Dilworth handle the difficult part of the Chorus deftly and successfully. In Euripides, they are tourists from another town come to see the solders and the fleet. In this adaptation there are five members of the Chorus (Ghazal Azarbad, Sascha Cole, Brenna MacCrimmon, Nicole Power and Jennifer Villaverde) and they speak and sing some beautiful pieces. They handle both spoken and sung verses splendidly.

The play is done in the small Tankhouse Theatre, a theatre-in-the-round, where no one is more than a few feet away from the rectangular playing area.

The costumes by Michelle Tracey suggest old without trying to be authentic and they work just fine. The soldiers who appear near the end are seriously Homeric.


_________
Wedding at Aulis, a version by Sina Gilani of Euripides’ Iphigenia in Aulis continues until April 14, 2019 at the Young Centre for the Performing Arts, 55 Tank House Lane, Toronto, Ontario. www.soulpepper.ca.