OTHELLO – REVIEW OF A NOISE WITHIN THEATRE PRODUCTION

Director Jessica Kubzansky, like all good directors, puts her own imprimatur on this production of Othello by A Noise Within Theatre in Pasadena, California. It is a modern dress staging and the officers and soldiers may be ostensibly Venetian, but we see nothing but men and women of the U.S. Army.

She has made some rational gender changes in keeping with the modern setting of the tragedy. Desdemona’s father Brabantio becomes her mother Senator Brabantia (Bonita Friedericy), the Duke of Venice is a woman (Sally Hughes) and Iago’s wife Emilia (Tania Verafield) is an officer. Sensible changes. 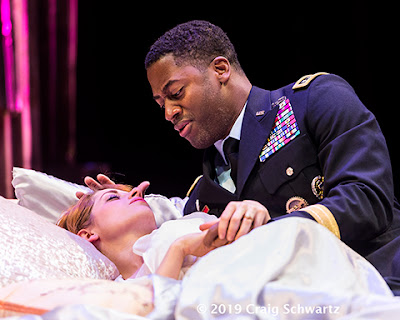 Angela Gulner and Wayne T. Carr, Photo: Craig Schwartz
With the protagonists being American, the emotional wavelength of the play is that of American officers and gentlemen. Othello may be black and there may be racism in the forces, but he is very much American and cannot be distinguished as a Moor, a foreigner, among the Venetians. This inevitably takes away something from the almost mythical Moor general who has fought strange battles in strange lands that Desdemona finds so fascinating during their meetings that led to falling in love.

Iago is a psychopath who plots revenge on Othello for being passed over for promotion but he shows no relish in his evil. In the opening scene Iago speaks directly to the audience and shows some flamboyance but the rest of his performance is more restrained. He and Emilia get along during most of the play. After all she is an officer and perhaps unlikely to be an abused wife.

Brabantia is racist to the core and her disapproval of Othello is based on her bigotry alone and not on his being an exotic foreigner as well who turned her daughter’s head with some type of black magic. She alleges it but it sounds hollow when directed against an American officer and a gentleman.

Angela Gulner’s Desdemona is a smart, modern woman who does not bother to take great care of her hair. She may be coquettish at times but it does not become her and she is no “delicate creature.” This changes the dynamics of Shakespeare’s play but we accept it in a modern view of the play.

Jeremy Robb’s Roderigo is a Venetian fool who is infatuated with Desdemona and decides to follow the troops to Cyprus in the hope of getting her. He appears with a large “Just Married” sign which he obviously pinched from the wedding of Othello and Desdemona. The wedding was done in secret, of course, but seeing Roderigo carrying it over his head expresses his character perfectly. Robb makes a perfect fool who is used by Iago and spends his money in hopeless wooing.

Most of Kubzansky’s changes are defensible in line with her take on the play. The problem arises in the emotional depths that must be reached by Othello when he loses his demeanor as a gentleman and becomes ugly and cruel in his fits of jealousy. Carr does a good job in the role but he does not reach the depths that we demand of Othello. 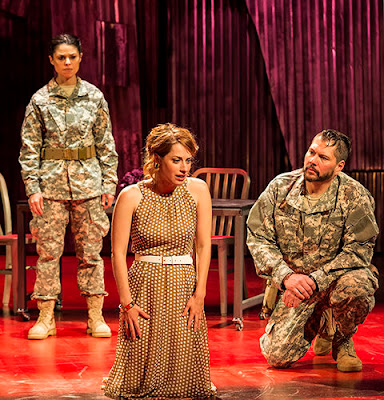 Tania Verafield, Angela Gulner and Michael Manual. Photo: Craig Schwartz
Part of the problem is the lack of poetry in the actors including Carr and Gulner. When he intones “It is the cause” there should be a sonority and resonance that is carried by his voice and the poetry. In the final scene Othello’s last words contain similar sonority when he says “I took by the throat the circumcised dog/ And smote him, thus.” On the word “thus” he stabs himself. In this production Kubzansky cuts out “thus” and the line ends on the word “him”. The phrase loses its cadence even if the director devises a truly shocking way for Othello to end his life. He grabs a pistol and shoots himself in the mouth.

The production is done on a bare stage with minimal props. The stage floor is red and there is generous use of the aisles of the 320-seat theatre. Frederica Nascimento is the Scenic Designer.

In the end this is a well-thought out and praiseworthy if idiosyncratic approach to the play with some parts of it not fitting well. I found it fascinating and enjoyed the performance.
_________
Othello by William Shakespeare runs until April 28, 2019 at A Noise Within Theatre, 3352 E. Foothill Blvd. Pasadena, California www.anoisewithin.org/