Many people know that in 1879 Nora Helmer walked out of her doll house leaving her husband Torvald and three children behind. The act was reviled as the height of treachery, an abhorrent breach of the sacred bond of marriage and parental obligation. It was also admired as a strike for liberty in a world where the wife was a subservient being with almost no legal rights and essentially her husband’s slave. That was in Henrik Ibsen’s A Doll’s House.

Whatever happened to Nora, her husband and her children after that? Playwright Lucas Hnath in A Doll’s House, Part 2, takes a stab at providing an answer by imagining Nora returning to her house 15 years after leaving it.

Nora (Deborah Hay) has become a successful and very well off writer. Her three children have been raised by the servant Anne-Marie (Kate Henning) and Torvald (Paul Essiembre) seems to be coping well. 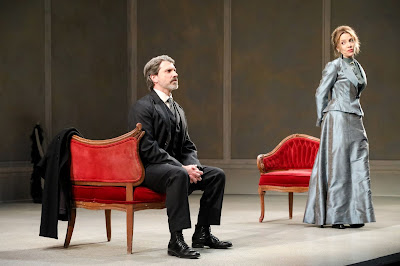 Paul Essiembre and Deborah Hay - Photo by Leif Norman
Why is Nora returning? Not out of love, or even curiosity, for the fate of her children or her husband but for entirely selfish reasons. She has been writing under a pseudonym and an irate judge is preparing to uncover her identity and her secret: Torvald never obtained a divorce and she is therefore still a married woman. A married woman cannot sign any contracts and she is in danger of losing everything and even her freedom.

The easiest solution is for Torvald to get a divorce. He refuses. She can get a divorce but she has to prove cruelty, drag his name through the mud and ruin him. She needs Ann-Marie’s help to execute this scheme. Final ploy: her daughter Emmy (Bahareh Yaraghi) can get a fake death certificate.

The thin plot is buttressed by more serious discussions about freedom and marital happiness. Nora treats us to a tirade against the very idea of marriage which may start as passionate wooing but ends horribly because people change and, well, so much for marriage. There is ingredient in the marital vows which is called children. Nora tells us about buying Christmas presents for her children in the first two years after abandoning them but that is the end of her emotional attachment or maternal feeling for them.

The reason her daughter is prepared to get a fraudulent death certificate for Nora is because she is in love and wants to get married. The impending revelations about her mother will ruin her chances of marriage. Rebelliousness, it seems, is not hereditary. 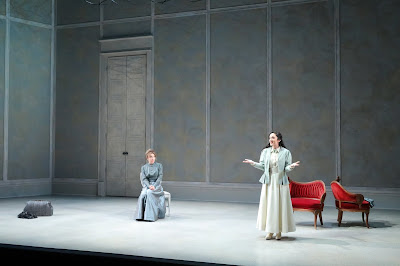 Deborah Hay and Bahareh Yaraghi - Photo by Leif Norman
A hard decision has to be made and bring the play to an end. It is but I will not disclose what it is.

Deborah Hay as Nora, with her flailing arms and grimaces, acts as if she is were an evangelical preacher at the pulpit. Maybe she is competing with Beto O’Rourke. I am not sure what director Krista Jackson had in mind but a more thoughtful and reserved Nora with some show of emotion may have been more convincing.

Essiembre, as Torvald is a conservative banker who does not seem to have realized why his wife left him but he raised their children and has remained a respected member of his society.

Kate Henning’s Anne-Marie is a tough old woman, now limping, who had no choice but to become a nurse raising other people’s children after abandoning her own child.

Bahareh Yaraghi as Emma shows little emotion and schemes to save her mother for selfish reasons. Is there no anger, resentment or soul-searching left?

The play is done on a bare, gray set with three chairs on it representing no doubt the barrenness of emotion. Teresa Przybylski is the set and costume designer.

More than a century later marriage has become either unnecessary or a formality for many. It has not gone out of style and however precarious many marriages are, they are entered with high hopes of until death do us part. But they are entered and broken with deep emotions. Nora’s act of rebellion for the freedom of women, unlike her tirade against marriage, has come a long way. Only getting a divorce in 2019 is more complicated than getting one in 1894. All Torvald had to do was go to the town office and get his divorce from the town clerk.
__________________
A Doll’s House, Part 2 by Lucas Hnath in a coproduction by Mirvish and Royal Manitoba Theatre Center opened on March 27 and will run until April 14, 2019 at the CAA Theatre, 651 Yonge St. , . www.mirvish.com