The Stratford Festival has brought out a film version of its 2018 production of Coriolanus. It was directed by the uniquely talented Robert Lepage and critics were falling over their superlatives in praise of the stage version. The film version deserves equal praise and the Festival’s intention to film productions of all of Shakespeare’s plays is a creditworthy ambition.

Lepage has re-imagined Shakespeare’s violent melodrama as a modern play complete with a broadcast studio, reporters running around with cameras, a sports car being driven at high speeds, a dinner in a posh restaurant and a scene in a sauna. Yes, they are all in Shakespeare’s play but the bard simply forgot to put in the stage directions especially about things that did not exist when he wrote it. Lepage corrects the omissions. 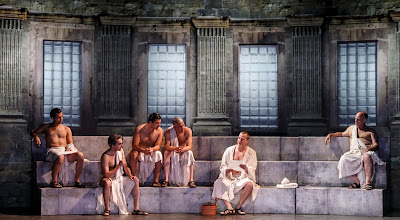 Members of the company in Coriolanus. Photography by David Hou.
Lepage used cinematic techniques for the stage version therefore the transfer to film directed by Barry Avrich becomes easier. The generous use of projections, the zeroing in on scenes and characters, the split screens are all in the original stage production and of course are the same in the film.

The film gives us the advantage of seeing facial expressions, grimaces and movements close up. In other words we get the best of a stage performance and a film. Those who did not see the Stratford performance may have missed the ambience and pleasure of live theatre (you can’t have everything) but this Coriolanus is pretty close to “the real thing.”

Lepage also designed the sets. Steve Blanchet is the Creative Director and Designer, Mara Gottler is the Costume Designer, Laurent Laurier is the Lighting Designer and Pedro Pires is the Images Designer. Needless to say much of the credit for the result goes to them.

The problem with dealing with the character of Coriolanus remains. Andre Sills brings out all of Coriolanus’s warrior qualities, brutality, ego, contempt for the people and unbending sense of entitlement. He enjoys war and killing because it is his code of honour. His mother Volumnia (played with utter conviction and expertise by Lucy Peacock) raised him with that code and given the choice between death and glory, he would choose death.

When Volumnia expresses her pride in her son’s return as a hero from a cruel war, his wife Virgilia (Alexis Gordon) points out that he could have died. Then his renown would have become her son, says Volumnia. She does not stop there. If she had a dozen sons she would just as soon lose eleven of them fighting nobly for their country than have one succumb to the sensual pleasures of life.

The performances have been praised extensively and deservedly. Andre Sills as Coriolanus exudes pitiless animal strength and considers blood and wounds as badges of honour. His hatred of the citizens of Rome is so boundless and offensive as to result in his expulsion from Rome. He joins Rome’s enemy to wreak vengeance on Rome. 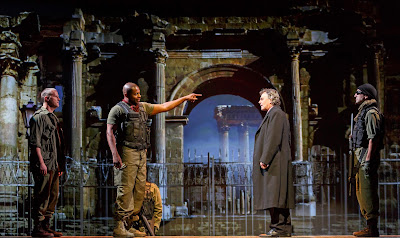 From left: Graham Abbey, André Sills, Tom McCamus and Farhang Ghajar.
Photography by David Hou.
Graham Abbey gives an exemplary performance as Aufidius, the general of the enemy Volscians who has the same ethos but not the same thirst for blood and cruelty. He has been defeated by Coriolanus numerous times and yearns for revenge.

Stephen Ouimette and Tom Rooney as the tribunes of the people provide perfect contrast to the warriors. They are downright gentlemen.  Michael Blake as General Cominius and Tom McCamus  as Menenius have the unpleasant task of trying to advise and control Coriolanus’s worst instincts. They fail.

As to the scenes mentioned in the second paragraph above, you will just have to see the film to figure out how they fit in.

If you saw the play, you are in luck because you can enjoy the experience again by seeing the film. If you didn’t, you get to see Shakespeare like you never saw before.
______________
Coriolanus by William Shakespeare in a film of the 2018 production at the Stratford Festival will be released on March 23, 2019 and shown in Cineplex Cinemas across the country. For participating locations visit https://www.cineplex.com/Events/Stage.
Coriolanus and The Tempest will air on CBC in the summer of 2019.