New Magic Valley Fun Town, Daniel McIvor’s new play at the Tarragon, could not be simpler on the surface. We see a nice living room with a small kitchen and one door leading to the outside and another to the bedroom and bathroom. A middle-aged man enters overladen with bags of chips and bottles of booze. He is Dougie (Daniel MacIvor) an overexcited klutz who drops a couple bottles of wine on the floor causing a mess. He is humorously neurotic. He lives in a trailer park house in Cape Breton.

A middle aged woman enters who knows him well and is fairly assertive. She is Cheryl (Caroline Gillis), Dougie’s wife. We find out that Dougie’s old and best friend Allen is about to visit. They have not seen each other for 25 years and Dougie is in overdrive wanting to please his old friend. Oops, you say. Your best friend and you have not seen him for 25 years? How reliable are your memories of your friends?

In comes Dougie’s loutish daughter Sandy (Stephanie MacDonald) in her pajamas and slippers and she looks like an oddball. She is suffering from depression and who knows what else. 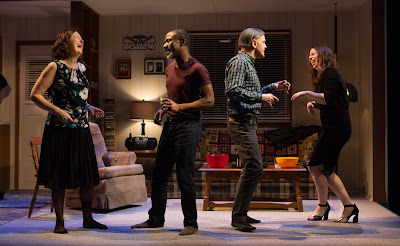 Caroline Gillis, Andrew Moodie, Daniel MacIvor and Stephanie MacDonald.
Photo: Cylla von Tiedemann
All appears fairly normal on the surface but we quickly realize that there is a serious undercurrent in all the characters that is probably very far from normal. All of them seem to have some loose if not missing screws, to put it colloquially. We laugh at their foibles, we give them the benefit of the doubt for a while but we try hard to figure out what is going on.

Allen (Andrew Moodie) arrives and the normal humorous/smooth surface is maintained but the contradictions and the latent undercurrent persist and increase. They eat, they drink, they dance boisterously and are funny but the mystery thickens as we notice more contradictions between surface appearance and latent reality.

With Harold Pinter’s ten short plays (Little Menace: Pinter Plays at Soulpepper) fresh in my mind, the play strikes me as Pintersque. I won’ go further than that.

Daniel MacIvor as Dougie dominates the play with a very delicate performance that is full of nervous energy while concealing a great deal. MacIvor can be very funny as he fumbles with everything that he touches and is able to let us know that there is another side to him. 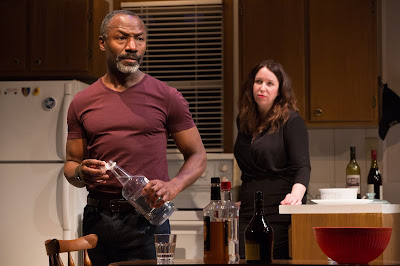 Andrew Moodie and Stephanie MacDonald. Photo: Cylla von Tiedemann
Moodie as the athletic-looking Allan is not what Dougie remembers or attempts to remember. He does not know his “friend” very well. Moodie turns in a strong performance.

Gillis’s Cheryl is a practical woman who is very religious and seems to be living in the real world. But you start having your doubts. We have our doubts about Sandy as well and MacDonald is very impressive in the role.

There is a punch line of a revelation in the play which is dramatically effective if a bit long in coming. The play is good but it is raised above that by Richard Rose’s fine directing and the acting by a superb cast. A lesser cast would have given us a flop. They did the opposite.
______

New Magic Valley Fun Town by Daniel MacIvor in a co-production by Prairie Theatre Exchange and Tarragon Theatre opened on February 27 and will play until March 30, 2019 at the Tarragon Theatre, 30 Bridgman Ave. Toronto, Ontario.  www.tarragontheatre.com